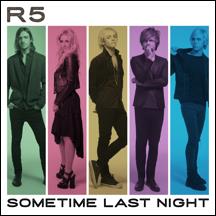 After almost two years of touring the world to packed-house crowds in more than 20 countries, enthralling fans across the globe with their live show, pop-rock quintet R5 has announced the upcoming release of their sophomore album, Sometime Last Night, and a major U.S. summer headlining tour of the same name.

Due out July 10 worldwide, the album is available for general public pre-order (U.S. only) beginning April 6 at 12 p.m. Eastern HERE. Those pre-ordering the album will receive a special presale code that allows early access to purchase tickets to R5’s summer tour.

The 30+ date U.S. tour, featuring special guests Jacob Whitesides and Ryland, will bring R5’s electrifying show to every corner of the U.S. The tour kicks off July 7 in Orange Park, FL at the Thrasher-Horne Center For The Arts and will include stops in Boston, Pittsburgh, Milwaukee, Kansas City, Houston, San Jose, Phoenix and Los Angeles at the famed Greek Theatre on August 23.

R5 fan club members will have first access to concert tickets through the band’s fan club presale beginning April 14 at 10 a.m. local time while those with a presale code from the album’s pre-order can purchase tickets starting at 12 p.m. local time at https://www.r5rocks.com/tour. Tickets for the tour will go on sale to the general public in select cities starting April 17 at 10 a.m. local time. For more information, please visit www.R5Rocks.com and www.AXS.com.

“We can’t wait for our fans to see what we have in store for them this summer,” said the band. “Playing such amazing venues has always been a dream of ours and we’re so excited to have our fans be a part of it.”

Adding to the excitement, R5 today premiered the video for the first single from their upcoming album, “Let’s Not Be Alone Tonight” exclusively on Vevo. The video was shot in Los Angeles with award-winning video director Robert Hales, who has also directed hit music videos for Justin Timberlake, Death Cab For Cutie, Imagine Dragons, and Alicia Keys, among others.

As previously announced, R5 teamed up with Fathom Events and AEG Live to bring the pop rock sensation’s incredible story to the big screen in R5: All Day, All Night. This special concert documentary event comes to nearly 400 select cinemas nationwide for one incredible night on Thursday, April 16 at 7:00 p.m. local time and includes epic concert footage – including the band’s standing-room-only performance at Los Angeles’ Roxy Theatre –, never-before-seen interviews and a look at the band from where they started to where they are now. Tickets can be purchased online by visiting www.FathomEvents.com or at participating theater box offices.