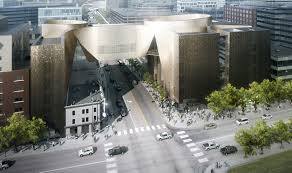 The National Music Centre (NMC) and Bell today announced a 12-year, $10 million partnership to support the construction of NMC’s new national home in Calgary’s East Village. Named Studio Bell, the facility will open to the public in spring 2016.

“Partnering with Bell supports our national vision and ability to connect with music lovers from coast to coast to coast,” said Andrew Mosker, President and CEO of the National Music Centre. “Studio Bell will be a technologically innovative national hub celebrating Canada and the power of music. We are confident the Studio Bell partnership positions us to deliver on our mission, vision and commitment to honour Canada’s music story.” “Bell is excited to help celebrate Canada’s rich music history with our support for the new home of the National Music Centre, Studio Bell,” said Loring Phinney, Vice-President Corporate Marketing, Bell Canada. “With our commitment to the development of Canadian media of all kinds, Bell is proud to invest in the National Music Centre and its work to inspire a new generation of musicians and music lovers across the country.”

Home of the National Music Centre currently under construction in Calgary’s East Village and scheduled to open in spring 2016, Studio Bell will be home to the National Music Centre, a national cultural organization devoted to amplifying a love, sharing, and understanding of music. It will become an international hub of music and technology, and will house NMC’s 2000+ piece collection of artifacts, instruments and music technology, 22,000 square feet of exhibitions devoted to telling the stories of music in Canada, a 300-seat performance space and recording studios.

The National Music Centre (NMC) is a national catalyst for discovery, innovation and renewal through music. In its new home at Studio Bell, NMC will preserve and celebrate Canada’s music story and inspire a new generation of music lovers through programming that includes on-site and outreach education programs, performances, artist incubation, and exhibitions.

The sponsorship was announced at an event this morning featuring a special performance by Randy Bachman, a longtime supporter of NMC. Bachman commemorated this NMC milestone by presenting the guitar on which he wrote and recorded “American Woman.” Bachman will lend the guitar to NMC for exhibition at Studio Bell when it opens.

NMC has raised $125 million towards its campaign goal of $168 million. The Government of Canada committed $25 million to the project through the Building Canada Fund – Major Infrastructure Component, and the Province of Alberta and the City of Calgary have each committed an additional $25 million. Coril Holdings Ltd. also contributed a $10 million gift to the campaign.