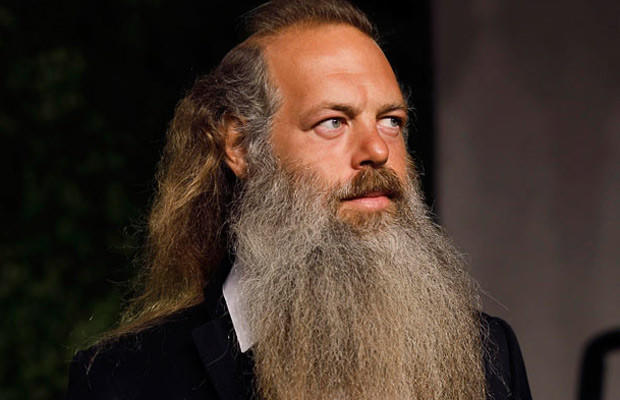 After changing music, oh, about five or six times, by working with The Beastie Boys, JJ Cool J, and Johnny Cash, Rick Rubin hit Genius to share the wisdom he’s gathered in his 30-plus years of producing. He annotated some of the classic songs he’s produced on—from Jay Z to Kanye West—as well as work he’s simply a fan of.  You can tell he’s still a big music fan, drawing on memories of his start, and what he’s listening to now.

You can check out all of his annotations here, and here are a few to obsess over.

On Kanye West’s “Only One” feat. Paul McCartney:

I was in St. Barths two days before the single came out. Kanye said, “I’m thinking about putting out ‘Only One’ tomorrow at midnight.” I said, “Should we mix it?” He was like, “It hasn’t really changed — it’s pretty much what it was.” I hadn’t heard it in almost two months, so I asked him to send it to me, and he did. And I said, “I think this can sound better than it does.” We never really finished it finished it.

So we called all the engineers — and I’m trying to get all this to happen all remotely — and we got maybe three different engineers. This is the day before New Year’s Eve, and we’re all finding studio time, getting the files. Then they all start sending me mixes. I thought one was better than the others, and Kanye agreed. One guy mastered it, because it was due, and they turned it in. I had another guy master it, and it was better, but it was already too late. I think it switched the following morning. It was in real time! Like as soon as it was better, we had to switch it.

That’s how it works in Kanye world. It used to really give me anxiety, but now I just know that’s what it is. That’s how he likes to work.

…Kanye is a combination of careful and spontaneous. He’ll find a theme he likes quickly, and then live with that for a while, not necessarily filling in all the words until later. At the end, he’ll fill in all the gaps.

He was upset at one point when I said that he wrote the lyrics quickly. He’s right — they percolate for a long time, he gets the phrasing into his brain, lives with it, and then lines come up. It definitely starts from this very spontaneous thing.

On “Only One,” a lot of those lyrics came out free-form, ad-libs. The song is essentially live, written in the moment. Some of the words were later improved, but most of it was stream of consciousness, just Kanye being in the moment.

Jay came into my studio every day for like a week, I kept trying things that I thought would sound like a Jay record, and after like three or four days he said, “I want to do something more like one of your old records, Beastie Boys-style.” Originally that’s not what I was thinking for him, but he requested that vibe, and we just started working on some tracks.

Musically, there were a couple of different ideas that [engineer] Jason [Lader] and I were working on independently that we played back together, and the way the beats overlapped was really interesting. It wasn’t planned out, it was more experimenting.

There was a part where it really sounded crazy and the beats were fighting each other. Jason was operating the Pro-Tools, and I’m saying “Move to the left, move to the right, try this beat, add this, do this,” and then he makes it do it. There’s nothing live on the track.

It’s a combination of three samples — “The Big Beat” by Billy Squier, “Long Red” by Mountain, and “Get Me Back On Time” by Wilson Pickett — and two programmed beats coming in and out.

There are so many records now where it’s about really, really heavy sub-bass, maybe a hi-hat, and just a voice.

I think a lot of it is the James Blake influence. I feel like he’s really influenced everybody a lot. I know in the artist community everybody loves Blake. James Blake is spectacular, I love him all the time. Live, he’s even better than on record.

It was never about proving anything, it was just that this is what I like and this is true to who they are. The only reason those first records were so aggressive, it had little to do with me. That was the good music at that moment. It wasn’t because it was that, it was the music. If the best music in that moment was folk music, that’s probably what I would have done first. I mean, I like all kinds of music, I always have, I’ve always listened to all kinds of music.

I never really listened to The Chronic. I guess I never liked smooth? Same with Puff, who really brought R&B into it. I preferred hip-hop when it was nothing like R&B. I love breakbeats and B-boy style drum machines. I never liked the slick stuff.

Something we talked about with Kanye was doing an alternate version of Yeezus,because there are so many versions of songs, great versions. There are versions just as good as what’s on the album, just different. I know as a fan of the album, I’d like to hear that. Maybe some day, whenever he wants. But it exists! That shit exists.

… “Bound 2” was a track that initially wasn’t a sample-based track. It was a band track with singing, no idea who. I got involved late in the game.

He came in one day and said he got inspired driving up the Pacific Coast Highway, on the way to my studio. He thought it would be a good thing to try the sample he found, so we tried that and the whole song changed. The chorus was still the old way, where it was sort of a band version. I took everything out of that and reduced it to one sort of ugly sounding synth. I would say the old version was more like MOR, R&B. That’s just an example of one song on Yeezus that changed a lot. Some of them changed a little, some of them changed a lot.

On Kanye West’s “Blood on the Leaves”:

I think he worked mostly out of an apartment in Paris, but I don’t really know the details, I never went there. I do know that it was a large space, because you could hear the reverb of the space in a lot of the tracks even when you didn’t want it. I think he liked the vibe there more than thinking it was a good place to make a good-sounding recording.

When he played Yeezus for me, it was like, three hours of stuff. We just went through it and figured out what was essential and what wasn’t. It was like deciding a point of view, and it was really his decision to make it minimal.

He kept saying it about tracks that he thought weren’t good enough and needed work. If he was going to leave me to work on stuff, he’d say, “Anything you can do to take stuff out instead of put stuff in, let’s do that.”

Kanye played at some festival after the release of Yeezus, and his whole rant was something to the effect of “I turn on the radio and nothing speaks to me, and I don’t want to have anything to do with it, and I don’t want my music on the radio because I don’t like what the radio is.” So in that mindset, it makes sense that he makes a record that isn’t for that. It’s not about that. It’s so anti. It’s almost anti-hip-hop. It’s crazy.

On the Beastie Boys’ “Girls”:

Adam Horovitz and I wrote “Girls” on a train. We trained down to DC to record with the Junkyard Band, this band of kids who played D.C. go-go on garbage cans. We put out a Junkyard Band single on Def Jam.

On the train back, we wrote “Girls”. It was rooted in an Isley Brothers song, “Shout.” It was written with that music in mind and then we sort of did our version of what that would have been. We just wrote really stupid, offensive words.