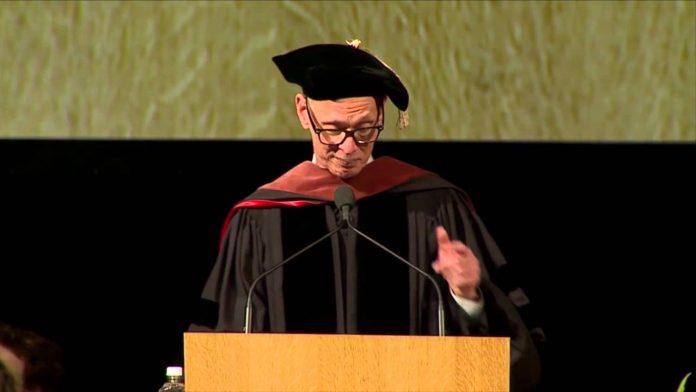 Lock it down. It’s over. John Waters just speaks the truth and nails every single word during his commencement speech to the Rhode Island School of Design’s graduating class of 2015.

I should say right off that I am really qualified to be your commencement speaker. I was suspended from high school, then kicked out of college in the first marijuana scandal ever on a university campus. I’ve been arrested several times. I’ve been known to dress in ludicrous fashions. I’ve also built a career out of negative reviews, and have been called “the prince of puke” by the press. And most recently a title I’m really proud of: “the people’s pervert.” I am honoured to be here today with my people.

You’re lucky. When I went to school, my teachers discouraged every dream I ever had. I wanted to be the filthiest person alive, but no school would let me. I bet RISD would’ve. You could possibly even make a snuff movie here and get an A+. Hopefully you have been taught never to fear rejection in the workplace. Remember, a no is free. Ask for the world and pay no mind if you are initially turned down. A career in the arts is like a hitchhiking trip: All you need is one person to say “Get in” and off you go. And then the confidence begins.

Never be like some of my generation who say “We had more fun in the ’60s.” No, we didn’t! The kids today who still live with their parents who haven’t seen them in months but leave food outside their bedroom doors are having just as much fun shutting down the government of foreign countries on their computer as we did banning the bomb.