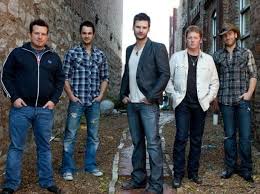 From the “I bet you didn’t know this” file – Emerson Drive have officially achieved their 20th Top 10 single with “Who We Are” at Canadian Country radio this week. The band now holds the record for the most Canadian Top 10’s in the modern music era. Who would have guessed them? I mean, they’re amazing guys, slightly superior over most country acts these days, and some of the finest lyrics on the radio, but…it would have taken me a few guesses to get to them. At least.

Emerson Drive’s extensive background in the country music landscape is undeniable. For well over a decade, the band has produced such hits as “I Should Be Sleeping,” “Moments,” “Fall Into Me” and their latest GOLD single – “She’s My Kind Of Crazy.” They have countless Canadian Country Music Association (CCMA) award wins, including three for Group or Duo of the Year, and they’re one of the only Canadian country bands in history to hold nominations from the Academy of Country Music awards (ACMs), the Country Music Association awards (CMAs) and the Grammys in the U.S., solidifying them as one of the great bands of all time.

President of Invictus Entertainment Group, Jim Cressman says “Longevity isn’t ubiquitous in this industry. By evolving their sound and listening to their fans, these guys have stood the test of time and are more relevant than ever.”

Expect new music from Emerson Drive on June 16th when their new single “Till The Summer’s Gone” hits radio.