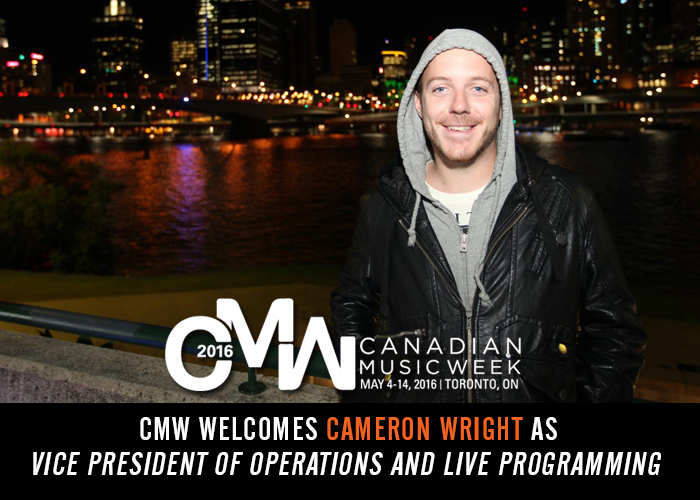 Canadian Music Week is pleased to welcome Cameron Wright as Vice President of Operations and Live Programming. In this role Cameron will oversee all aspects of the festival and additionally assist with programming in the Live Touring Music Summit. This position marks Wright’s return to Canadian Music Week having previously held the role of Festival Director for five years before moving to Live Nation in 2014.

“We are thrilled Cameron is returning to Canadian Music Week in a new expanded leadership role. He is joining CMW at a crucial juncture where live music has emerged as the fastest growing sector of the music industry. Cameron¹s tenure at Live Nation adds to his already extensive experience with live music bookings. He will oversee both CMW¹s live music festival as well as touring & live music content for the CMW Conference”, says CMW President Neill Dixon.

As a promoter for Live Nation Cameron focused on club development and the theatre touring business. He has worked with artists such as Hozier, Faith No More, Stromae, Tove Lo, Milky Chance, Nick Jonas, Meghan Trainor, Catfish and the Bottlemen, as well as prominent local acts Alvvays, Dear Rouge, K.I.D., and Coleman Hell. In addition, Cameron brings a wealth of experience to the festival having worked as a production manager for companies such as AEG, Embrace, Union Events and more.

“I’m very excited to return back to my roots at CMW, this time in a larger role, and to be working alongside our great international partners as we continue to make the event a world-class destination for emerging talent”, states Wright.