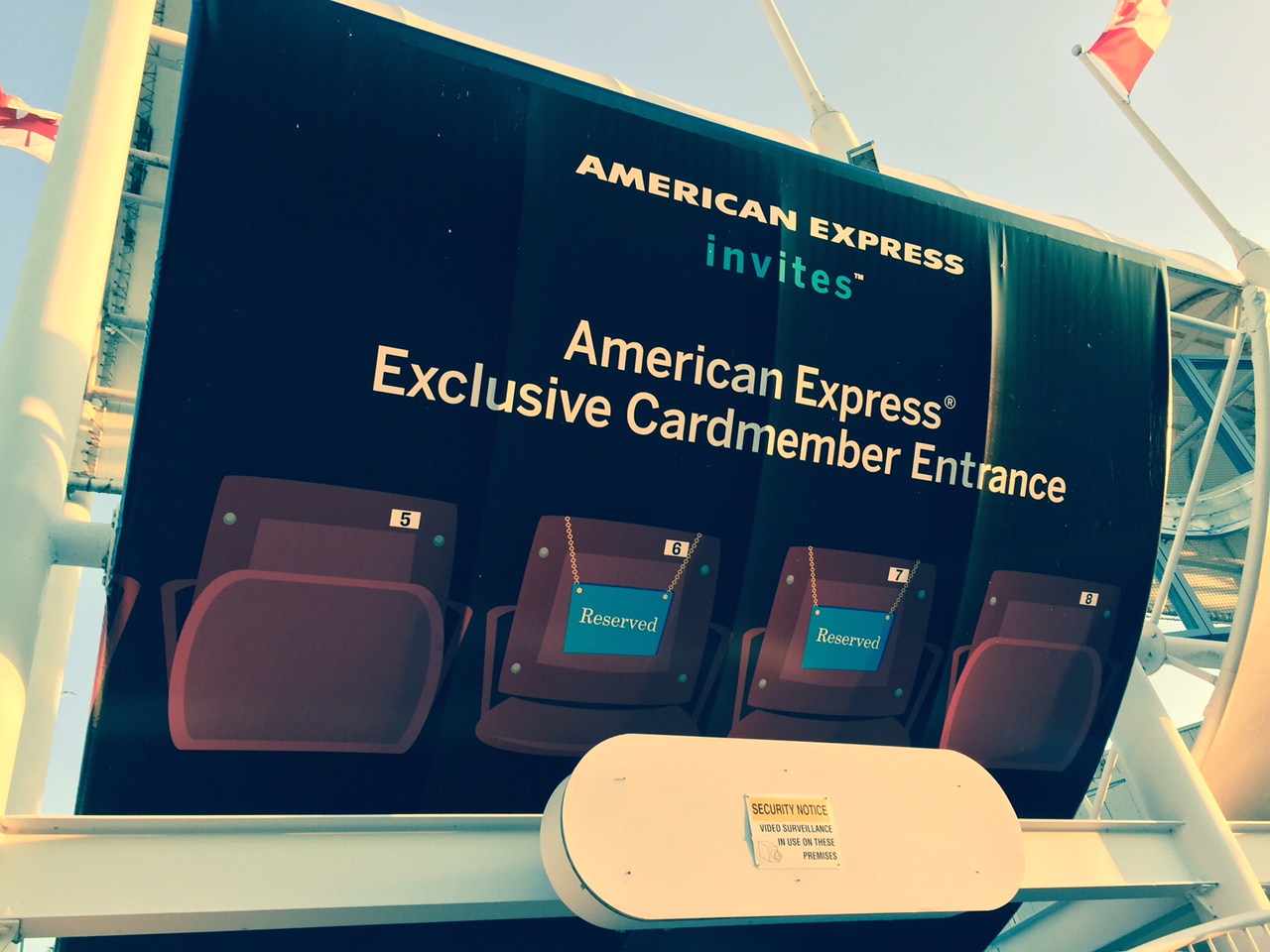 This summer was the sound of country music for me. Having been invited by American Express to see four of the finest singers and songwriters the genre has produced – Rascal Flatts, Jason Aldean, Zac Brown Band and Lady Antebellum – you can tell each of the performers have lived through different stages to get to the top of their game.

Amex has evolved from being not only a credit card provider Cardmember but a leading provider in one-of-a-kind-experiences for its Cardmembers through Front Of The Line Advanced Presales and Reserved Ticket allotments and Cardmember Lounges at venues across Canada. This access definitely makes for experiences like none other.

I don’t own a cowboy hat, because if I wore one, I’d be nothing but hat. Every country guy or girl owns camo for hunting. I don’t hunt, nor have a camo, two of the style rules for country music code. Three, actually, since I don’t own cowboy boots because me, in a cowboy hat and boots would cover my entire body up completely. BUT I HAVE LOTS OF PLAID SHIRTS. In fact, I don’t want to make anyone jealous, but I can still fit into my shirts I wore from high school. So, I ended up wearing four of my favourite plaid shirts to these concerts.

At each concert this summer, I got to hang with some new friends in the Amex Lounge, a fun and warm, inviting place American Express offers Cardmembers. Here, Cardmembers can seek shade from the hot summer sun or shelter from spontaneous rain storms, to having complimentary water, hanging out in an exclusive bar, and tasting from their delicious menu from one of Toronto’s hottest restaurants, Barque.

I didn’t dig into the amazing menu until the last show – Jason Aldean in mid-September, and now I wish I had earlier. I had the pleasure of taking my friend Cadence Grace of country group, Runaway Angels, to the show. We had one minor problem at the offset – which choice of nachos to get (we got both), which sandwich to eat (we ordered chicken and beef), and how many s’mores to buy, and when (four and right at the beginning of the meal).

It was great to have Cadence around. She knows country music is changing, and we talked about the success of these four artists and their unparalleled success in country, along with “bro country” really means, and the power of a song.

That’s not to say you have to be a country star like Cadence to enjoy the shows. The stories of small-town characters, contemplating their lives and their loves, are so memorable that you can bet many will be thinking of these songs when they turn back the pages of their yearbooks. It’s those memories of partying, drinking, bonfires and girls in jean shorts that make up a strong component of country lyrics, and it’s exactly why country music has thrived in recent years. Heavily influenced by other genres, like rock and hip-hop, country brought the party atmosphere to the forefront of the concert experience. Rascal Flatts, Jason Aldean, Zac Brown Band and Lady Antebellum have introduced more people to country music than almost any other artists, and bring the party – and heartache – to new and old music fans.

And do these crowds love to dance! It’s astounding the courage and free spirited energy the artists make Toronto audiences feel, whether they’ve got moves or not. Another positive thing I noticed was the lack of cell phones raised after the first few songs. The audiences know that by taping the show, you’re not really experiencing the concert, but experiencing the screen on your phone. Whether I was in the first few rows of Rascal Flatts, mid-venue for Jason Aldean, or moving to the lawns near the end of Lady Antebellum’s set, the fans were right into it.

While the music industry talks about streaming, having access to 25 million songs at your fingertips, we’re entering a whole new age when it comes to live shows. For those on the move, a concert is a great way to get out of the house, relax, or join a mosh pit (there were several happening on the lawns at Jason’s show). For those who want to take it easy, American Express gives Cardmembers access to tickets before the general public through Front Of The Line Presales, so having some of the best available seats is a breeze. Add the excellent clarity for sound provided by the Molson Canadian Amphitheatre, and you have one of the greatest adventures you can have as a music fan.

Looking for your own memorable experience? Explore www.AmexInvites.ca to learn more about some of the hottest upcoming events.