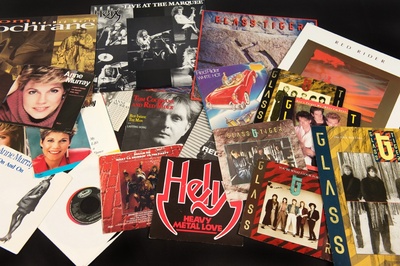 Universal Music Canada acquired the archive when Universal Music Group purchased EMI Music in 2012. Now, thanks to this gift, the music label that has represented top Canadian artists for more than 50 years will soon have its files and recordings open to the public.

“We are delighted to receive this rich business and cultural archive and be entrusted with the safekeeping and preservation of this outstanding testament to Canadian ingenuity,” said Elizabeth Cannon, president and vice-chancellor of the University of Calgary. “We aspire to be the best in order to inspire the best in others. This gift from Universal Music Canada and our partnership with the National Music Centre allow us to do just that.”

Capitol Records Canada, under EMI Music Canada, was the first label in North America to release The Beatles and Pink Floyd. The 1963 singles by The Beatles, Love Me Do, Please Please Me, and From Me to You, were released in Canada months before She Loves You, the band’s first release in the United States.

Students, researchers and music fans in Calgary and around the world will have access to documentation of more than half a century of contemporary music spanning a variety of genres including folk, jazz, classical, country, pop, rock and heavy metal.

EMI Music Canada distributed the music of international artists while focusing on the development of Canadian talent.

“Plans for an educational component around music and the ambitions for this archive are tremendously exciting,” said Jeffrey Remedios, president and CEO of Universal Music Canada. “EMI Music Canada became the source of the music many Canadians grew up listening to. It’s such a rich and treasured history and it’s terrific that generations to come will have the opportunity to explore that.”

In addition to the gift of the EMI Music Canada Archive, Universal Music Canada will provide substantial funding over several years to support the preservation and management of the collection.

The University of Calgary and NMC will collaborate on opportunities for the public to celebrate music in Canada through educational programming and exhibitions that highlight the archive and are available at Studio Bell, NMC’s new facility that opens this summer.

“We are eager to work with Universal Music Canada and the University of Calgary to explore programming and exhibition opportunities that bring the wealth of this collection to Canadians,” said Andrew Mosker, president and CEO for the National Music Centre. “From our burgeoning music scene, the opening of Studio Bell this summer and this incredible archive, it is safe to say that Calgary is becoming a serious music city.”

“The EMI Music Canada Archive is one of the most culturally significant collections of the last century to be acquired by a research library,” said Tom Hickerson, vice-provost (Libraries and Cultural Resources). “The collection will be managed by the University of Calgary’s Archives and Special Collections and made accessible to students, faculty and the public.”

The EMI Music Canada Archive will be used for research and course work within the School of Creative and Performing Arts and in many other disciplines across the campus.

Libraries and Cultural Resources has established a virtual exhibit of items from the EMI Music Canada Archive. Please visit www.ucalgary.ca/emi.

Because of the immensity of the EMI Music Canada Archive, the collection will be transferred from Toronto in multiple shipments over the next few years.