It wasn’t that long ago – 60 years to be exact – on December 1st, 1955, the course of history was changed when Rosa Parks refused to give up her bus seat for a white passenger and was subsequently arrested. For the next year, until racial segregation was deemed unconstitutional by the federal courts, a boycott of the public transport system, headed by Martin Luther King, took place. On December 19th of 1956, the eve of a historic victory for those opposed to such segregation, King prepared a list of guidelines for those soon to be re-boarding the buses.

What King would think of the US election this year…His words have gone so far, and yet, so far they seem to be when it comes to peaceful relations and resolutions. 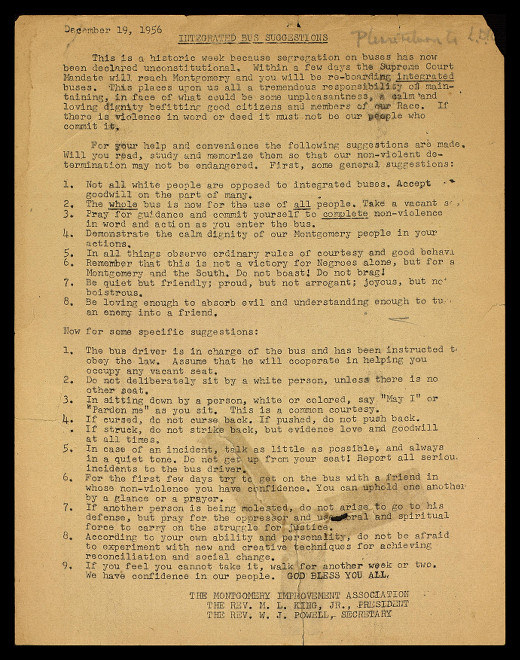 This is a historic week because segregation on buses has now been declared unconstitutional. Within a few days the Supreme Court Mandate will reach Montgomery and you will be re-boarding integratedbuses. This places upon us all a tremendous responsibility of maintaining, in face of what could be some unpleasantness, a calm and loving dignity befitting good citizens and members of our Race. If there is violence in word or deed it must not be our people who commit it.

For your help and convenience the following suggestions are made. Will you read, study and memorize them so that our non-violent determination may not be endangered. First, some general suggestions:

1 Not all white people are opposed to integrated buses. Accept goodwill on the part of many.

2 The whole bus is now for the use of all Take a vacant seat.

3 Pray for guidance and commit yourself to complete non-violence in word and action as you enter the bus.

4 Demonstrate the calm dignity of our Montgomery people in your actions.

5 In all things observe ordinary rules of courtesy and good behavior.

6 Remember that this is not a victory for Negroes alone, but for all Montgomery and the South. Do not boast! Do not brag!

7 Be quiet but friendly; proud, but not arrogant; joyous, but not boisterous.

Now for some specific suggestions:

1 The bus driver is in charge of the bus and has been instructed to obey the law. Assume that he will cooperate in helping you occupy any vacant seat.

2 Do not deliberately sit by a white person, unless there is no other seat.

3 In sitting down by a person, white or colored, say “May I” or “Pardon me” as you sit. This is a common courtesy.

4 If cursed, do not curse back. If pushed, do not push back. If struck, do not strike back, but evidence love and goodwill at all times.

5 In case of an incident, talk as little as possible, and always in a quiet tone. Do not get up from your seat! Report all serious incidents to the bus driver.

6 For the first few days try to get on the bus with a friend in whose non-violence you have confidence. You can uphold one another by a glance or a prayer.

7 If another person is being molested, do not arise to go to his defense, but pray for the oppressor and use moral and spiritual force to carry on the struggle for justice.

8 According to your own ability and personality, do not be afraid to experiment with new and creative techniques for achieving reconciliation and social change.

If you feel you cannot take it, walk for another week or two. We have confidence in our people. GOD BLESS YOU ALL.