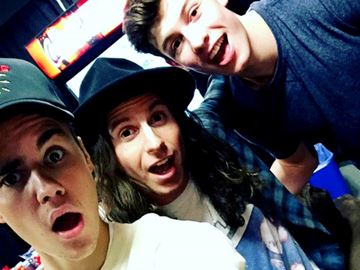 Thornhill Liberal
By David Li
Having worked with Justin Bieber as his lead guitarist and musical director since 2009, former Thornhill resident, Dan Kanter, has been one of the key figures behind the massive international success of the former YouTube star.

So it’s fitting that the Ottawa-born Kanter will be at the Sheraton Centre Toronto Hotel this week during Canadian Music Week as part of a panel discussing YouTube singers and cover artists.

“It’s great to see so many people from the industry coming together to speak about everything from music to social media to business,” said Kanter, who lived on Hilda Avenue in Thornhill while studying at York University more than a decade ago.

The 34-year-old adds that YouTube has been an important platform for other pop stars besides Bieber, such as Pickering native Shawn Mendes and 23-year-old American Tori Kelly.

Among the other notable speakers joining Kanter to discuss various industry related topics during Music Week will be Capitol Music Group USA Chairman and CEO, Steve Barnett, Richmond Hill social media guru and music insider Eric Alper, and Jeffrey Remedios, who is the president and CEO of Universal Music Canada — to name just a few.

Reflecting on his own incredible journey, Kanter credits his involvement with Universal Music Canada for his big break back in 2009.

“Justin was in Canada and needed someone who could play the guitar with him — not only on MuchMusic — but also someone who can step into a bigger role as a musical director and somewhat of a musical mentor. I was recommended by Universal Music because I worked closely with many of their artists,” recalled Kanter of how he first connected with the Grammy Award-winning artist.

“I met him and his team a night before a performance at MuchMusic and from the very beginning we hit it off and have been like family ever since,” Kanter said of his close relationship to Bieber, who not attended his wedding to fashion consultant Yael Latner in October of 2010; but also performed.

Kanter has some insight on what makes Bieber such an international success.

“Bottom line is his incredible talent and that’s something that is undeniable when you see him. He plays many instruments. He plays guitar, piano and drums; and he’s a great song-writer and amazing performer. From my experience working with him, he’s only gotten better and better.”

Someone who can provide insight on Kanter’s own talents is SiriusXM radio host Alper, who first met the Thornhill rock star in 2014 when he was a judge on YTV’s The Next Star.

“I’m really impressed by Dan’s ability to understand how an artist thinks; it’s not an easy job to meet an artist with the calibre and talent that Justin Bieber had as a kid and for Dan to be able to work with Justin so closely and have all that success together over the years says a lot,” he said about Kanter.

“Dan’s just an incredible overall musician and he’s been able to handle his success with charm and grace. I think a lot of that can be attributed to his background and education at York’s music program,” Alper added about his fellow York University alumni.

During his time working with the now 22-year-old Bieber, Kanter points out that there’s been many highlights, including writing music together and performing live in front of 100,000 fans.

Then there’s the two appearances on Saturday Night Live.

Kanter has also worked with Stevie Wonder, Shawn Mendes and Drake, to name just a few. The 34-year-old appreciates good music whether from a relative unknown act or an established performer.

“I’m a music fan first and foremost — Canadian Music Week is incredible because it has everything from performances by established acts to developing acts,” said Kanter, who adds he’s eager to take in performances by guitar legend Zakk Wylde, as well as, rising young Canadian star, Scott Helman.

While YouTube and social media have been important platforms for the breakthrough success of artists such as Bieber and Mendes, Kanter is quick to highlight the importance for up-and-coming artists to put on a great live performance — and make the most out of Music Week.

“The singers and bands that I like, I liked them because they blew me away when I saw them in concert; not because I listened to their record or album in my headphones,” noted Kanter.

“So it’s really about getting out there and putting on an incredible live show and winning over fans one by one.”

Canadian Music Week runs from May 2 to 8. For more info, visit CMW.net