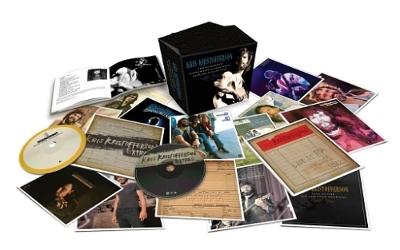 The Complete Monument & Columbia Album Collection box set includes a deluxe booklet featuring essays and liner notes penned especially for this anthology: 1) an introduction to Kristofferson written by Fred Foster, the visionary founder of Monument Records who signed Kris as a songwriter to Combine Music and a recording artist for Monument, who released his debut album in 1970; 2) an aesthetic appreciation of the artist–“Kris Kristofferson True American Hero””–by famed musician/producer Don Was; and 3) a revelatory and insightful portrait of Kris Kristofferson and his music from acclaimed American writer and journalist Mikal Gilmore.

Born June 22, 1936 in Brownsville, Texas, Kristoffer (“Kris”) Kristofferson has been an active force in the entertainment industry for the past half century. An influential singer/songwriter who changed the contours of American country music with the lyrical insight and penetrating honesty of his songs, a US Army veteran (who served from 1960-1965, achieving the rank of Captain) and former Oxford University Rhodes Scholar who won a Golden Globes Best Actor Award (for his starring role opposite Barbra Streisand in the 1976 movie smash “A Star Is Born”), Kris Kristofferson is both a multi-faceted artist and a bonafide American icon.

A musician whose sound bridges the worlds of country, folk, rock and gospel, Kristofferson is one of the sonic architects of the American outlaw country movement. Having written and recorded such hit songs as “Me and Bobby McGee,” “For the Good Times,” “Sunday Mornin’ Comin’ Down,” “Help Me Make It Through the Night” and many others, Kris Kristofferson is among the most influential and admired musicians in the world, with a body of work that spans the late 20th and early 21st centuries. In 1985, he united with fellow outlaw country artists Willie Nelson, Johnny Cash and Waylon Jennings to form The Highwaymen, the world’s first country music “supergroup.” He was induced into the Country Music Hall of Fame in 2004.

Kristofferson wrote his first songs while studying at Merton College at Oxford University, hoping the craft of songwriting would further his goal of becoming a novelist. While in England, he cut his first records as “Kris Carson” for the Top Rank Records label. This early foray into the music industry proved unsuccessful. Graduating Oxford with a master’s degree in English literature in 1960, Kristofferson eventually relocated to Nashville, Tennessee, where he began to ply his trade as a songwriter while working as a series of other jobs including helicopter pilot, oil rig operator (in Louisiana) and janitor at Columbia Recording Studios.

By 1967, Kristofferson had signed with Epic Records, who released an unsuccessful single, “Golden Idol”/”Killing Time”. Meanwhile, Kris Kristofferson-penned songs were hitting the charts, performed by other artists including Roy Drusky (“Jody and the Kid”); Billy Walker & the Tennessee Walkers (“From the Bottle to the Bottom”); Ray Stevens (“Sunday Mornin’ Comin’ Down”); Jerry Lee Lewis (“Once More with Feeling”); Faron Young (“Your Time’s Comin'”); and Roger Miller (“Me and Bobby McGee”, “Best of all Possible Worlds”, and “Darby’s Castle”). Kris started to achieve attention as a performer in his own right, especially after being introduced on-stage at the Newport Folk Festival by Johnny Cash.

Signed as a recording artist to Monument Records by the prescient Fred Foster, Kristofferson saw his eponymous debut album released in 1970. The album, Kristofferson, included newly written originals as well as some of Kris’s most familiar hits for other artists; re-released as Me & Bobby McGee a year later, the collection put Kris Kristofferson front and center in the worlds of popular and country music. Ray Price’s recording of “For the Good Times” helped the composition win the Academy of Country Music’s Song of the Year in 1970 while Johnny Cash’s version of “Sunday Mornin’ Comin’ Down” secured the Song of the Year award that same year from the Country Music Association. Kris Kristofferson’s double win for Song of the Year in 1970 marked the only time a single individual has ever achieved the same award–from Country Music’s two competing professional guilds–in the same year for two different songs.

In 1971, Janis Joplin’s definitive recording of “Me and Bobby McGee” became a #1 hit and remains a radio perennial to this day. While a string of Kristofferson songs became hits for other artists–Ray Price (“I’d Rather Be Sorry”); Joe Simon (“Help Me Make It Through the Night”); Bobby Bare (“Please Don’t Tell Me How the Story Ends”); O.C. Smith (“Help Me Make It Through the Night”); Jerry Lee Lewis (“Me and Bobby McGee”); Patti Page (“I’d Rather Be Sorry”); Peggy Little (“I’ve Got to Have You”) and Kenny Rogers (“Me and Bobby McGee”), Kristofferson solidified his position as a recordings artist with the release of The Silver Tongued Devil and I in 1971. He swept the Grammys in 1971 with several nominations, winning Country Song of the Year for “Help Me Make It Through the Night.”