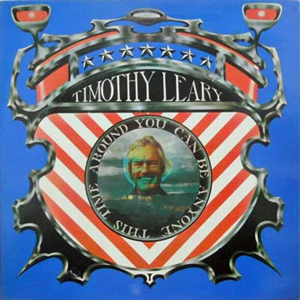 Timothy Leary’s album, which was recorded in 1968, You Can Be Anyone This Time Around featured three “raps” by Leary backed with psychedelic music. The purpose of the album was to raise funds for Leary’s political candidacy for Governor of California.

The album includes musical contributions from Jimi Hendrix on bass for Live and Let Live, and other geniuses like Stephen Stills, John Sebastian, and Buddy Miles recording during an all-night jam session at the Record Plant.

The title track and “What Do You Turn On When You Turn On” both feature sampling of music by other artists, including The Beatles, The Rolling Stones, and Ravi Shankar. This is one of the earliest known examples of sampling on a commercial record, which later led to lawyers figuring out there might be some new business to be had.