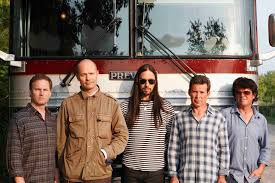 In the wake of the grim news last week that Tragically Hip frontman and lyricist Gord Downie has been diagnosed with terminal cancer, the band’s sales have soared.

According to Nielsen Canada SoundScan data, album sales for the band went from 340 last week to over 5,000 in the week, with their ’05 best-of album Yer Favourites re-entering the Billboard Canadian Albums consumption chart at #6 with 4,500 consumption units which combines sales, streams and track sales.

Track sales from the band’s catalogue leap from 1,400 to over 15,000 in the week, including eight in the top 200 Digital Songs chart. On-Demand streams increased from over 400,000 in the previous week to well over two million–and exposure on radio increased by 28 percent.