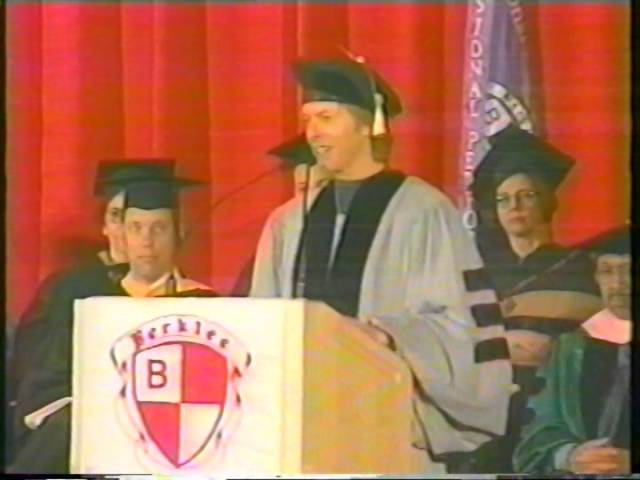 David Bowie did few interviews and, from what I find, this was his only commencement speech he ever gave – to the Berklee College of Music graduating class in 1999. There are several gems in his 8-minute talk, and the full transcript is below.

Thank you. Thanks very much. Rockers… Jazzers… Samplers… That was a fantastic concert last night. I think both Wayne and myself were just so moved to hear our compositions coming back at us through your ears and abilities. It was dynamite. You don’t know how much we appreciate it.

I chatted with some of the students last night and I asked one of them if he could give me a good joke to start today off with and also his worst fear.

He said, “I’ll give you both. How does a tuba player answer the telephone? Hello, Dominoes.”

Oh, I should remind you that anybody left over from the proceedings today can join my wife and I at [local pizza place] Little Stevie’s for a slice. Dunkin Donuts, then, alright?

I’ve got a message here for the administration from my sometimes-collaborator and fellow musician Reeves Gabrels, ex-alumni. It says here, “I haven’t forgotten that $900 I owe from my last semester. I should point out that this has been owed since the spring of 1980. I read recently in Allegro that they are holding an unclaimed check for me backdating from my days with Tin Machine.”

Well, that should wipe out about $30-worth right there.

As always on occasions like this, I really never know what to do—which is pretty much the way that I’ve handled my career as a musician/writer. I guess any list of advice I have to offer to a musician always ends with “If it itches, go and see a doctor.” Real world! But that’s not going to be of any help today.

My sometimes-collaborator Brian Eno described himself as a non-musician. In fact he tried to get it put into his passport as his work definition. [faking British customs officer voice] “Non-musician? Made any records?” [impersonating Brian Eno] “Of course not. I’m a bloody non-musician.” Anyway I’d describe myself, I think, as a bit of a non-musician. I took classes, initially, after seeing the Little Richard band in a film with, at that time Britain’s foremost baritone jazz player Ronnie Ross. I was about 14 and I gave him a phone. I found his number in the phone book and he very kindly took me on. But I quickly found that what was written as “be doo boo doobie doop ba doo bip …” That’s a George Redman composition, West Coast band, 60s you wouldn’t know about it.

“Be doobiee doobie doop a doop bip,” when I started playing it, came out as “bdzzzz dzzzzz zzzz.” So it seemed that authenticity and the natural form of expression wasn’t going to be my forte. In fact, what I found that I was good at doing, and what I really enjoyed the most, was the game of “what if?” What if you combined Brecht-Weill musical drama with rhythm and blues? What happens if you transplant the French chanson with the Philly sound? Will Schoenberg lie comfortably with Little Richard? Can you put haggis and snails on the same plate? Well, no, but some of the ideas did work out very well.

So, I learned enough saxophone and guitar and what’s euphemistically called “composer’s piano” to get my ideas over to proper musicians, as we have here today. And then I went on a crusade, I suppose, to change the kind of information that rock music contained. I adored Coltrane, Harry Parch, Eric Dolphy, Velvet Underground, John Cage, Sonny Stitt. Unfortunately, I also loved Anthony Newley, Florence Foster Jenkins, Johnnie Ray, Julie London, the legendary Stardust Cowboy, Edith Piaf and Shirley Bassey.

A word about Shirley Bassey. During the very early days of Ziggy Stardust, we often used to play these fairly grotty clubs called the “workingman’s clubs.” They were sort of like nightclubs but you got a cheap meal. The whole family would come. A round of beer. A rock act. A stripper—sometimes one in the same. Well, backstage one night I was desperate to use the bathroom. I was dressed in my full, battle finery of Tokyo-spaceboy and a pair of shoes high enough that it induced nose bleeds. I went up to the promoter—actually I tottered over to the promoter—and I asked, “Could you please tell me where the lavatory is?”

And he said, “Yeah, look down that corridor. On the far end of that wall. You see that sink? There you go.”

From which I learned that mixing elements of bad taste with good would often produce the most interesting results. So, in short, I didn’t feel comfortable as a folk singer or an R&B singer or a balladeer. I was drawn more and more to the idea of manipulation of signs, rather than individual expression—a concept that really had its start in the late 50s with Pop Art and by the early 70s I found myself making what British writer Simon Fricke described as “art pop.”

It wasn’t so much about how I felt about things, but rather, how things around me felt. To put it simply, I had discovered the Englishman’s true place in rock and roll. This all sounds, I suppose, quite dispassionate, but believe me, still, even now, when I hear the most fantastic solo being played on a CD and it’s on the fadeout, I still rush over to the volume switch and bring it up in proportion to the way it’s fading down, so I can catch that last note. It still is very much my life. It’s impossible for me to talk about popular music without mentioning probably my greatest mentor, John Lennon. I guess he defined for me, at any rate, how one could twist and turn the fabric of pop and imbue it with elements from other artforms, often producing something extremely beautiful, very powerful and imbued with strangeness. Also, uninvited, John would wax on endlessly about any topic under the sun and was over-endowed with opinions. I immediately felt empathy with that. Whenever the two of us got together it started to resemble Beavis and Butthead on “Crossfire.”

The seductive thing about John was his sense of humor. Surrealistically enough, we were first introduced in about 1974 by Elizabeth Taylor. Miss Taylor had been trying to get me to make a movie with her. It involved going to Russia and wearing something red, gold and diaphanous. Not terribly encouraging, really. I can’t remember what it was called—it wasn’t On the Waterfront, anyway, I know that.

We were in LA, and one night she had a party to which both John and I had been invited. I think we were polite with each other, in that kind of older-younger way. Although there were only a few years between us, in rock and roll that’s a generation, you know? Oh boy, is it ever.

So John was sort of [in Liverpool accent] “Oh, here comes another new one.” And I was sort of, “It’s John Lennon! I don’t know what to say. Don’t mention the Beatles, you’ll look really stupid.”

And he said, “Hello, Dave.” And I said, “I’ve got everything you’ve made—except the Beatles.”

A couple of nights later we found ourselves backstage at the Grammys where I had to present “the thing” to Aretha Franklin. Before the show I’d been telling John that I didn’t think America really got what I did, that I was misunderstood. Remember that I was in my 20s and out of my head.

So the big moment came and I ripped open the envelope and announced, “The winner is Aretha Franklin.” Aretha steps forward, and with not so much as a glance in my direction, snatches the trophy out of my hands and says, “Thank you everybody. I’m so happy I could even kiss David Bowie.” Which she didn’t! And she promptly spun around swanned off stage right. So I slunk off stage left.

And John bounds over and gives me a theatrical kiss and a hug and says “See, Dave. America loves ya.”

We pretty much got on like a house on fire after that.

He once famously described glam rock as just rock and roll with lipstick on. He was wrong of course, but it was very funny.

Towards the end of the 70s, a group of us went off to Hong Kong on a holiday and John was in, sort of, house-husband mode and wanted to show Sean the world. And during one of our expeditions on the back streets a kid comes running up to him and says, “Are you John Lennon?” And he said, “No but I wish I had his money.” Which I promptly stole for myself.

[imitating a fan] “Are you David Bowie?”

No, but I wish I had his money.

It’s brilliant. It was such a wonderful thing to say. The kid said, “Oh, sorry. Of course you aren’t,” and ran off. I thought, “This is the most effective device I’ve heard.”

I was back in New York a couple of months later in Soho, downtown, and a voice pipes up in my ear, “Are you David Bowie?” And I said, “No, but I wish I had his money.”

“You lying bastard. You wish you had my money.” It was John Lennon.

These are just a few moments from my life. This moment is very definitely yours. Thank you so much for indulging me for the last 10 minutes. I hope it’s been reasonably interesting for you.

Music has given me over 40 years of extraordinary experiences. I can’t say that life’s pains or more tragic episodes have been diminished because of it. But it’s allowed me so many moments of companionship when I’ve been lonely and a sublime means of communication when I wanted to touch people. It’s been both my doorway of perception and the house that I live in.

I only hope that it embraces you with the same lusty life force that it graciously offered me. Thank you very much and remember, if it itches, play it.