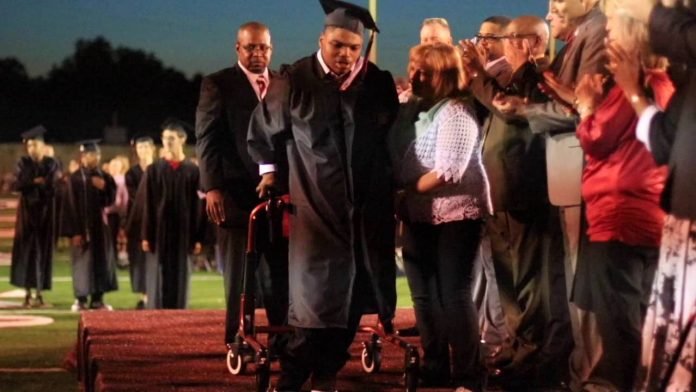 While other graduates prepare for graduation day, Okmulgee High school graduate Micah (Josh) McDade was preparing for much more. Born with cerebral palsy since birth, McDade has had a lifetime of obstacles, numerous surgeries to overcome and hours upon hours of physical therapy. He never gave up on his path to someday do what comes naturally to most everyone else…walk.

Though he has been told by doctors it may never happen, Micah believes with will, determination and the power of God, all things are possible. On the night of his high school graduation, Micah proved this.

About three years prior Micah made his plan to walk for his diploma. McDade had a muscle reconstructive surgery in August of 2015. After his recovery in December he had just five short months to prepare. Unbeknownst to his friends and classmates, behind the scenes Micah was working harder than ever to achieve his goal and he picked a very poignant day in his life to show the world.

May 20, 2016, Micah was pushed in his wheelchair to the graduation stage in Harmon Stadium. With shock and surprise, his graduating class and the whole audience realized what he was about to attempt. Yes, Micah stepped out onto the stage. The crowds erupted into cheers and applause, there was barely a dry eye in the audience as everyone stood to their feet and cheered Micah on every step of the way. As he made his way to the end of the platform, announcer Craig Brydges said, “Ladies and gentlemen, I’ve been doing this a long time – THAT is the best ever!”