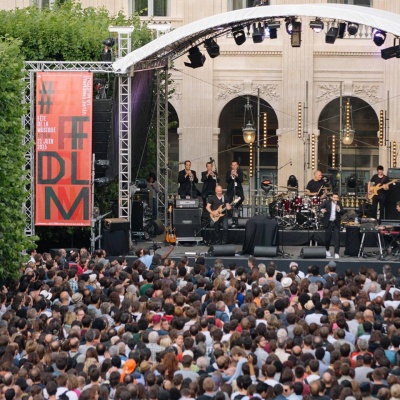 Held annually on June 21 to coincide with the summer solstice, Make Music Day is part of the international Fête de la Musique, taking place in 700 cities across 120 countries. The daylong, musical free-for-all celebrates music in all its forms, encouraging people to band together and play in free public concerts. This year, 38 U.S. cities and the entire state of Vermont are organizing Make Music celebrations, encompassing thousands of music making opportunities nationwide. Make Music Day is presented by the NAMM Foundation and coordinated by the nonprofit Make Music Alliance. For more information, please visitwww.makemusicday.org.

Unlike typical musical festivals, Make Music Day, presented by the NAMM Foundation and coordinated by the nonprofit Make Music Alliance, seeks to encourage all people, young and old, amateur or professional, to experience the pleasures and benefits of making music. On the longest day of the year first-time and seasoned musicians pour out onto streets, and into parks, plazas, porches and other public spaces to share music-making with friends, neighbors, and other music-makers.

Free guitar, harmonica, ukulele, drum and other instrumental lessons are being offered nationwide. In New York City, 50 guitar teachers will set up in the pedestrian plazas around Times Square, equipped with a guitar for themselves and a guitar for anyone interested in learning to play, presented by Fender. In Nashville, The Country Music Hall of Fame and Museum will be hosting free, group guitar lessons during which aspiring guitarists will learn basic chords and strumming techniques through familiar country songs.

Sousapaloozas in Chicago, Cleveland, New York and St. Paul, will bring together hundreds of brass and wind musicians to play the music of John Philip Sousa while Street Studios in Chattanooga, Los Angeles, Boston and New York will feature DJs and producers with a simple setup  – a laptop, mics, MIDI controllers, speakers, and instruments – bringing gear and engaging passersby in a spontaneous, collaborative production of original music on the street. In partnership with Found Sound Nation, audio products leader HARMAN will transport the basic elements of a music studio to six public spaces in New York City andLos Angeles and in four cities abroad – and make them open and accessible to everyone in the local community. In Boston, Lumit Audio is presenting Street Studio.

Stones/Water/Time Breath, a meditative piece of music by Dean Rosenthal in which participants will skip stones and take in the beauty of the simple sounds of nature in Boston, Chicago, New York, Philadelphia, Pittsburgh, Seattle, and Washington, D.C.

Philip Glass, known as one of New York City’s iconic musical figures, will help usher in Make Music New York’s second decade by playing from his Etudes for piano at Pier i in Riverside Park, along with 40 students from New York City public schools.

Inside the Bird Chorus: New York City’s avian life is celebrated in this project by composer/clarinetist David Rothenberg, conceived as a dialogue between improvising musicians and native bird species of the city. Rothenberg performs at Brooklyn Botanic Garden, and their resident bird expert will be on hand for conversation. There will be similar performances by other musicians at wildlife havens in all five boroughs, at either dawn or dusk (prime bird-call hours), in partnership with the National Audubon Society.

The Bumblebee Challenge: Around the country, woodwind, brass and string players will strive to play the fastest, most accurate performance of Rimsky-Korsakov’s “Flight of the Bumblebee.” Participants can enter using a special free version of SmartMusic, the interactive music practice software.

“Eye of the Tiger” on Boomwhackers: Fans attending baseball games on Make Music Day in New York City (the minor league Staten Island Yankees) and in Madison, Wisconsin (the collegiate Madison Mallards) will be given Boomwhackers – pitched hollow pipes made of plastic. During the seventh-inning stretch, conductors and a singer will come onto the field and lead fans in a crowdsourced performance of Survivor’s anthemic “Eye of the Tiger,” inviting people to whack the tubes on cue, on the seats or bleachers in front of them. Original Survivor front man Dave Bickler, renowned for his vocals on “Eye of the Tiger,” will sing the classic hit at the Staten Island Yankees game.

Jazz Foundation of America, which offers a variety of programs and assistance for jazz and blues musicians in need, is presenting gigs in Buffalo, Chicago, Cleveland, Detroit, Los Angeles, Philadelphia, Pittsburgh, and Seattle, bringing more free, high-quality jazz to the public and giving performance opportunities to over a dozen living legends.

Clavinova Cafe: In a partnership between Yamaha and nearly 60 music retailers around the country, people can try out a Clavinova keyboard, learn to play a song, and enter to win an instrument.

Other events around the country will highlight the musical history and ingenuity of each city including:

Minneapolis, MN – John Munson of Semisonic, the Minneapolis-based alternative rock band whose song, “Closing Time,” soared to the top of the charts in 1998, will lead a ukulele jam session. Sheet music will be provided, just bring your uke.

Cleveland, OH – Twenty string players will perform the National Anthem at Progressive Field prior to the baseball game between the Cleveland Indians and Tampa Bay Rays. Additionally, musical groups lined up along the concourse will play throughout the game, and two bands will perform at each entrance gate when the stadium opens at 6 pm.

Salem, OR – Original and all current members of The Kingsmen will lead a play-along performance of their enigmatic 1963 hit, “Louie Louie“and musicians will perform on the steps of the State Capitol.

Detroit, MI – A massive performance will take place on the front plaza of the Detroit Institute of Art.

Make Music Day began in France in 1982 as the Fête de la Musique where it takes place every year on June 21, the summer solstice. It has since spread to over 700 cities across 120 countries.

All Make Music Day events are free and open to the public. Participants who wish to perform, or to host musical events, may register at www.makemusicday.org. The full schedule of events will be posted on the website in early June.