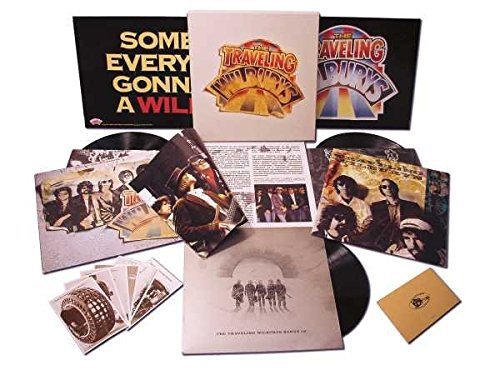 In honor of the upcoming Traveling Wilburys reissue campaign, here are a pair of videos offering behind-the-scenes glimpses of the group.

The Traveling Wilburys Collection (Deluxe Edition) contains Vol. 1, Vol. 3 with bonus tracks, and a DVD with a True History of The Traveling Wilburys mini-documentary and the 5 music videos. Packaged in a linen wrapped rigid slipcase and includes a 40 page casebound book, an envelope containing 2 photocards, 2 postcards, a fabric sticker and a numbered certificate of authenticity.

The Wilburys formed in 1988 after Bob Dylan, George Harrison, Tom Petty, Jeff Lynne and Roy Orbison assembled at Dylan’s Malibu, California studio to record a B-side for the Harrison single “This Is Love.” The resulting song, “Handle With Care,” was instead released under the Wilburys name, with the artists posing as a band of brothers. George later said, “I liked the song and the way that it turned out with all these people on it so much that I just carried it around in my pocket for ages thinking, ‘Well what can I do with this thing?’ And the only thing to do I could think of was do another nine. Make an album.” The original album release, Traveling Wilburys Vol. 1, achieved great success; after hitting No. 3 on the Billboard Top 200 chart, the certified double Platinum album earned a GRAMMY for Best Rock Performance by a Duo or Group.