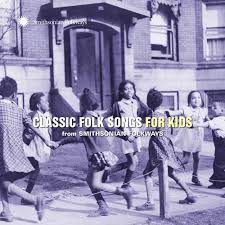 One of my all-time favourite labels, Smithsonian Folkways’ latest release is one that can be enjoyed by the entire family: ‘Classic Folk Songs for Kids,’ a 25-track compilation CD of some of the most popular folk songs of all time set to be released July 15. ‘Classic Folk Songs for Kids’ features performances from some of the American folk greats including Pete Seeger, Woody Guthrie, Lead Belly, Ella Jenkins and Elizabeth Mitchell, to name a few. The album includes a 40-page booklet with a brief history of these American children’s tunes and the complete lyrics to each track. It’s the 26th album in the award-winning Classic Series from Smithsonian Folkways.

As archivist for Smithsonian Folkways Recordings, Jeff Place has been involved in the compilation of over fifty CDs of American Music since 1988. Now Place has curated another: ‘Classic Folk Songs for Kids.’ Place previously contributed to Smithsonian Folkways’ compilation of ‘Lead Belly Sings for Children’ the Pete Seeger ‘American Favorite Ballad’ series, and was one of the producers of the acclaimed 1997 edition of the ‘Anthology of American Folk Music.’

Place says of ‘Classic Folk Songs for Kids,’ “the songs included here can be found widely today. Thought of as ‘old and anonymous,’ they have been taught in schools and summer camps. They are songs adults remember from their childhood and can share with their children.” In fact, many of the songs in the album are songs that over time have been shared and changed to evolve to what they are today. Dubbed the “folk process,” a melody was reinvented time and time again with new themes and words to address situations as they arose. During the 20th century, song collectors like John Lomax Sr., Carl Sandburg, and Robert Winslow Gordon collected and preserved many of the songs the great American folk songs that are still sung today.

‘Classic Folk Songs for Kids’ includes timeless American classics that we all remember hearing as children. “Skip to My Lou,” “Yankee Doodle,” and “On Top of Old Smoky” are just a few of the many American signature sing-alongs that appear on the album.

Smithsonian Folkways continues to value children’s music and how it can bring families together through this release. “These songs are for singing together, maybe in a car, maybe at a party, maybe just at home for fun,” notes Place in the forward. “In the spirit of legendary singer Pete Seeger, who dedicated his life to keeping people interacting together and to bonding together through song, we invite you to do the same.”