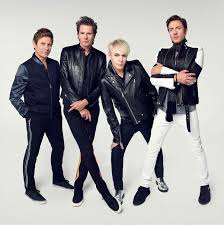 Regrettably, keyboardist Nick Rhodes will be leaving the current Duran Duran tour tomorrow for a short period of time,to return to the UK to attend to an urgent family matter. The band have just embarked on the third US leg of their Paper Gods tour, which kicked off last night in Nashville. They are currently in Chicago, where they play two nights at the Ravinia Pavilion (Friday July 8 and Saturday July 9).

Nick will be temporarily replaced by long-time friend and collaborator, artist MNDR.

Speaking this afternoon from Chicago, Nick said “I am devastated to be missing even a single date on this tour. We are having such an amazing time and the shows have been fantastic. I will be back as soon as possible but know, in the meantime, that I am leaving both my band mates and the fans in incredibly good hands, with the amazing MNDR.”