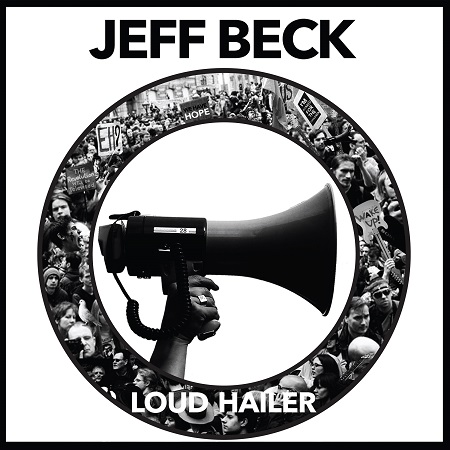 On Jeff Beck’s forthcoming studio album LOUD HAILER, his first in six years, the legendary guitarist combines fluid fretwork with topical lyrics to make a powerful statement about everything from the love of power, to the power of love. LOUD HAILER will be available on Atco Records, an imprint of Rhino Entertainment, on July 15 on CD, LP, and digitally.

Loud hailer, which is another name for a megaphone, is a suitable moniker for an album that isn’t shy about speaking its mind. The two-time Rock and Roll Hall of Famer explains: “I really wanted to make a statement about some of the nasty things I see going on in the world today, and I loved the idea of being at a rally and using this loud device to shout my point of view.” The album’s first single, the riotous rocker “Live In The Dark,” will be unleashed soon.

To help him write the 11 tracks on LOUD HAILER, Beck enlisted two fierce young females from London: singer Rosie Bones and guitarist Carmen Vandenberg. It was a chance meeting with Vandenberg last year at a birthday party for Queen drummer Roger Taylor that eventually led to the trio’s collaboration. “She invited me to one of their shows, and I was blown away,” the guitarist recalls. “When we got together in January, I explained the subject matter I had in mind, we sat down by the fire with a crate of Prosecco and got right to it. The songs came together very quickly; five in three days.”

Beck produced LOUD HAILER with Filippo Cimatti, who also works with Rosie and Carmen. In addition to the core trio, the album also features drummer Davide Sollazzi and bassist Giovanni Pallotti, who were both recruited by Cimatti.

Bones lends her powerful voice to nine of the 11 songs on LOUD HAILER, including the intense album opener “The Revolution Will Be Televised,” the reflective ballad “Scared For The Children,” the funk infused “O.I.L.” and the tranquil album closer “Shrine.” The album is rounded out by two signature Beck instrumentals in “Pull It” and “Edna.”

A few days after the album’s release, Beck will launch a summer tour of the U.S. with blues legend Buddy Guy. And on August 10, Beck, with special guests to be announced shortly, will make his Hollywood Bowl debut for a very special, career-spanning concert that celebrate 50 years of ‘dynamic music making.’ “It will be head teacher Beck in a gown and mortar board in front of the class giving everyone a history lesson,” he jokes. The show will also include an orchestra.

Over the course of Beck’s illustrious 50-year career, the trailblazing guitarist has earned many accolades. He has twice been inducted into the Rock & Roll Hall of Fame. First, as a member of the Yardbirds in 1992 and then again, as a solo artist, in 2009. Rolling Stone ranked him as one of the “100 Greatest Guitarists of All Time” and he has earned a total of eight Grammy Awards during his long career. In addition, Beck has been a guest performer at scores of sessions with everyone from Stevie Wonder and Buddy Guy to Tina Turner and Mick Jagger. Throughout his career, Beck routinely makes the fantastically difficult sound effortless.

Inspired by the sleek curves, luxurious finish and iconic imagery of the hot rods he builds, BECK01 is hand-bound in leather and aluminum with every book numbered and personally signed by the author, Jeff Beck. The guitarist’s handpicked selection of more than 400 rare and unseen photographs and items of memorabilia is narrated with an original manuscript of nearly 20,000 words, making BECK01 the definitive visual and historical record of the dynamic musician. Included is an eloquent forward by John McLaughlin that begins, “Jeff Beck is my all-time favourite guitarist, what do I say after that?” Indeed.

LOUD HAILER
Track Listing
“The Revolution Will Be Televised”
“Live In The Dark”
“Pull It”
“Thugs Club”
“Scared For The Children”
“Right Now”
“Shame”
“Edna”
“The Ballad Of The Jersey Wives”
“O.I.L.”
“Shrine”

Jeff Beck Summer Tour w/Buddy Guy (*except where noted below):

More dates TBA
*Jeff Beck ONLY on these dates