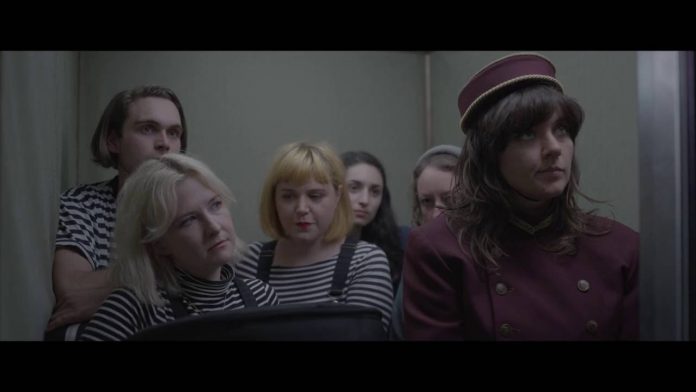 In her new video for “Elevator Operator,” Courtney Barnett is surrounded by people who treat her like crap. She’s taken on the role of an elevator operator, after all, and is clad in a maroon uniform with a bewildered look on her face. The video, directed by Sunny Leunig, is loaded with cameos from characters and musicians Barnett admires — including confused members of Sleater-Kinney trying to find Town Hall and Wilco’s Jeff Tweedy eating a banana and playing chess with his son Spencer.

Other visitors include the legendary Australian musician Paul Kelly, as well as members of Australian bands Batpiss, Ouch My Face, The Drones, The Finks and the East Brunswick Girls Choir. When she’s in the elevator, Barnett is met by nuns, blue aliens in sparkly dance costumes, and a sad person in a kangaroo costume. It’s a video with absurdity to match Barnett’s wry lyrics; the song recounts the story of a boy who sees the world like Sim City and builds pyramids out of Coke cans, as well as an older woman who admires his youth and soft skin and fears he’s about to leap from a building. All he wants, of course, is to be an elevator operator.