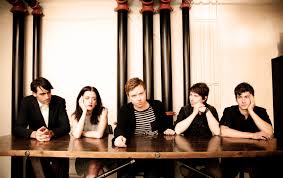 From June 9 to 23, 2016, Canadian music fans voted for their favourite from the 10 songs nominated by a panel of music industry experts. Other than nominees having to be members of SOCAN, the Canadian music rights organization had no role in determining nominees or winners.

After the votes were tallied, “Julia” was the English song that came out on top. A record of nearly 30,000 votes were cast in this year’s English and French competitions, shattering 2015’s record total by almost 33%.

“I’m surprised and thrilled to hear we’ve won this prize, and beyond honoured to have been included alongside so many spectacular Canadian songwriters,” said Matthew Angus. “Really, everybody on the list deserved this prize. Big thanks to our fans for voting, to the folks on the panel for selecting us, and to SOCAN for continuing to do stuff like this to help inspire, promote, and protect Canadian music creators. We love ya something fierce!”

“The SOCAN Songwriting Prize celebrates the art and work of music creation,” said Michael McCarty, SOCAN Chief Membership & Business Development Officer. “‘Julia’ is a winner deserving of the prize, and congratulations to Matt Angus for creating a fantastic, creative song that caught the ear of our judging panel, and music fans around the world.”

For winning the competition, Fast Romantics receive $10,000 from SOCAN, a choice between a Seagull Artist Studio CW guitar or Godin 5th Avenue Jazz guitar from Godin Guitars, a Yamaha PSRS970 keyboard from Yamaha Canada, and a $500 gift card from Long & McQuade.

The SOCAN Songwriting Prize identifies 10 outstanding songs each in English and French created over the past year by emerging songwriters, as selected by a panel of 15 esteemed music industry experts. The general public is then invited to vote up to one time daily for their favourite in English or French to decide the winners in each language.

The winner of the French-language equivalent prize, the Prix de la chanson SOCAN, was Laurence Nerbonne, for her song “Rêves d’été.”