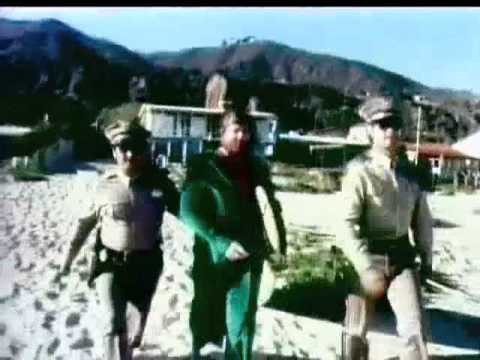 From the NBC television special It’s OK, produced by Saturday Night Live creator Lorne Michaels during the break between SNL‘s first and second seasons. The one-hour special aired to promote the Beach Boys’ 15th anniversary and their latest release, 15 Big Ones. Wilson had just rejoined the group, and the special was part of the “Brian’s Back” publicity campaign.

In this sketch, John Belushi and Dan Aykroyd play a pair of California Highway Patrol officers who burst into the bedroom of Wilson’s home and force the musician who was likely in a sandbox earlier to get up and go surfing. “Brian,” says Aykroyd, “we have a citation here for you sir under Section 936A of the California Catch a Wave Statute. Brian, you’re in violation of Paragraph 12: failing to surf, neglecting to use a state beach for surfing purposes, and otherwise avoiding surfboards, surfing and surf.”