In the five years since Snapchat launched, the app has amassed a large and active user base. eMarketer projects 58.6 million US consumers will use Snapchat at least once per month in 2016. eMarketer’s user estimate would represent 28.3% of US smartphone users and 18.1% of the US population. Both of these percentages would be a considerable gain from two years ago, when Snapchat was used regularly by just 10.3% of US consumers and less than 20% of US smartphone users. The app’s popularity grew quickly in 2014 and 2015, with year-over-year growth rates of 83.9% and 40.7%, respectively.

What is anticipated to change significantly is the size of the Snapchat audience. eMarketer projects two more years of double-digit growth in the number of monthly active users—a 27.2% year-over-year increase this year, followed by a 13.6% increase next year. In 2018 and beyond, when the Snapchat audience is expected to be substantially larger than it is today, year-over-year increases will be in the single-digit range.

Millennials (those born between 1981 and 2000) make up the largest share of Snapchat’s US user base, totaling 40.9 million and representing 70% of Snapchat’s monthly active users in 2016, according to eMarketer’s estimates. Millennials will remain in the majority going forward, but their share of the total Snapchat audience will shrink each year as the app’s appeal increases among other generations. eMarketer predicts millennials will make up 56% of all US Snapchat users by the end of 2020. 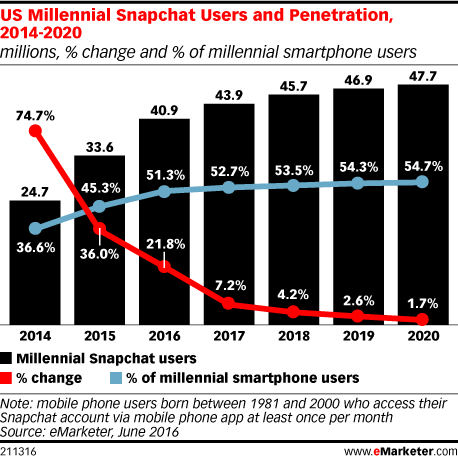