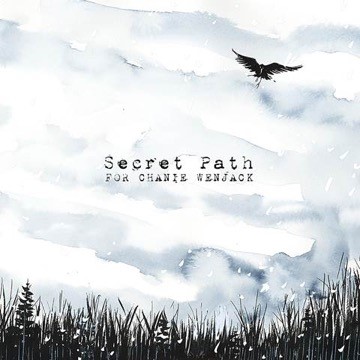 Tragically Hip singer Gord Downie will release his Secret Path album with a graphic novel by Jeff Lemire on October 18, 2016 through Arts & Crafts/Universal.

Gord Downie began Secret Path as ten poems, incited by the story of Chanie Wenjack, a twelve year-old boy who died in flight from the Cecilia Jeffrey Indian Residential School near Kenora, Ontario, fifty years ago, walking home to the family he was taken from over 400 miles away. Gord was introduced to Chanie Wenjack (miscalled “Charlie” by his teachers) by Mike Downie, his brother, who shared with him Ian Adams’ Maclean’s story from February 6, 1967, “The Lonely Death of Charlie Wenjack.”

In winter 2014, Gord and Mike brought the recently finished Secret Path music to graphic novelist Jeff Lemire for his help illustrating Chanie Wenjack’s story, bringing him and the many children like him to life.

The ten song album will be released by Arts & Crafts accompanied by Lemire’s eighty-eight page graphic novel published by Simon & Schuster Canada. Secret Path will arrive on October 18, 2016, in a deluxe vinyl and book edition, and as a book with album download.

Downie’s music and Lemire’s illustrations have inspired The Secret Path, an animated film to be broadcast by CBC in an hour-long commercial-free television special on Sunday, October 23, 2016, at 9pm (9:30 NT).

The broadcast date marks the fiftieth anniversary of the morning Chanie’s body was found frozen beside the railroad tracks only twelve miles into his journey.

Secret Path acknowledges a dark part of Canada’s history – the long-suppressed mistreatment of Indigenous children and families by the residential school system – with the hope of starting our country on a road to reconciliation. Every year as we remember Chanie Wenjack, the hope for Secret Path is that it educates all Canadians young and old on this omitted part of our history, urging our entire nation to play an active role in the preservation of Indigenous lives and culture in Canada.

Mike Downie introduced me to Chanie Wenjack; he gave me the story from Ian Adams’ Maclean’s magazine story dating back to February 6, 1967, “The Lonely Death of Charlie Wenjack.”

Chanie, misnamed Charlie by his teachers, was a young boy who died on October 22, 1966, walking the railroad tracks, trying to escape from the Cecilia Jeffrey Indian Residential School to walk home. Chanie’s home was 400 miles away. He didn’t know that. He didn’t know where it was, nor how to find it, but, like so many kids – more than anyone will be able to imagine – he tried. I never knew Chanie, but I will always love him.

Chanie haunts me. His story is Canada’s story. This is about Canada. We are not the country we thought we were. History will be re-written. We are all accountable, but this begins in the late 1800s and goes to 1996. “White” Canada knew – on somebody’s purpose – nothing about this. We weren’t taught it in school; it was hardly ever mentioned.

All of those Governments, and all of those Churches, for all of those years, misused themselves. They hurt many children. They broke up many families. They erased entire communities. It will take seven generations to fix this. Seven. Seven is not arbitrary. This is far from over. Things up north have never been harder. Canada is not Canada. We are not the country we think we are.

I have always wondered why, even as a kid, I never thought of Canada as a country – It’s not a popular thought; you keep it to yourself – I never wrote of it as so. The next hundred years are going to be painful as we come to know Chanie Wenjack and thousands like him – as we find out about ourselves, about all of us – but only when we do can we truly call ourselves, “Canada.” 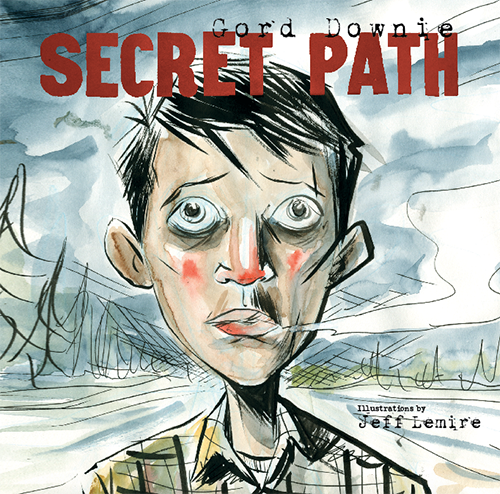 I first met Gord Downie and his brother Mike back in the winter of 2014. They wanted to discuss a potential project and, over coffee, they told me the story of Chanie “Charlie” Wenjack. Gord was then in the final stages of recording his incredible songs based on Chanie’s life and he shared the rough mixes with me in the hopes that I would be interested in creating a graphic novel to accompany his album. Before we left the coffee shop I knew I was going to do it. I had to. Chanie’s story is one that will not let you go once you hear it. It’s a story that can’t be ignored. And yet, somehow, it has been ignored. By nearly all of us.

Growing up white in Southern Ontario, I never learned about Chanie Wenjack or about any of the tens of thousands of other indigenous children like him who were part of Canada’s residential school system. This is such a massive part of our country’s history, yet our schools didn’t teach us about it. Why? Maybe because it’s easier to live with ourselves if we pretend stories like Chanie’s never happened. But they did happen, and still happen. Chanie Wenjack lived and died, and no one knows his story.

I’ve spent the last three years living with Chanie’s story and living inside Gord’s music. Gord’s haunting songs introduced me to Chanie Wenjack. Music is universal. It crosses languages and cultures and speaks to everyone, and I’ve always felt the medium of comics could do the same. It’s our hope that one day Secret Path will be taught in schools and that it will help to shed a light on this all too often ignored part of Canada’s past. I think, above all else, that’s what Gord and I wanted to create: something that can’t be ignored. Every Canadian should know Chanie Wenjack’s name and I hope Secret Path helps to make that a reality.