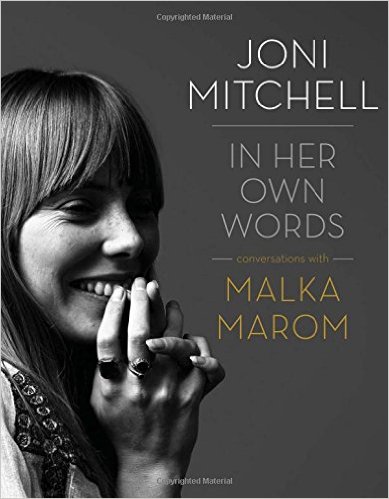 In Joni Mitchell: In Her Own Words, Joni follows seven decades of life and art, discussing the influence of Joni’s childhood, love and loss, playing dives and huge festivals, acclaim and criticism, poverty and affluence, glamorous triumphs and tragic mistakes.

I had difficulty at one point accepting my affluence, and my success, even the expression of it seemed to me distasteful at one time, like to suddenly be driving a fancy car. I had a lot of soul searching to do. I felt that living in elegance and luxury cancelled creativity, or even some of that sort of Sunday school philosophy that luxury comes as a guest and then becomes the master. That was a philosophy that I held onto. I still had that stereotyped idea that success would deter it, that luxury would make you too comfortable and complacent and that the gift would suffer from it.

But I found that I was able to express it in the work, even at the time when it was distasteful to me… The only way that I could reconcile with myself and my art was to say, “This is what I’m going through now; my life is changing. I show up at the gig in a big limousine and that’s a fact of life.”

I’m an extremist as far as lifestyle goes. I need to live simply and primitively sometimes, at least for short periods of the year, in order to keep in touch with something more basic. But I have come to be able to finally enjoy my success, and to use it as a form of self-expression.

Leonard Cohen has a line that says, “Do not dress in those rags for me, / I know you are not poor.” When I heard that line, I thought to myself that I had been denying, which was hypocritical. I had been denying, just as that line in that song, I had played down my wealth.

Many people in the rock business [have] their patched jeans and their Levi jackets, which is a comfortable way to dress, but also it’s a way of keeping yourself aligned with your audience. For instance, if you were to show up at a rock and roll concert dressed in gold lamé and all of your audience was in Salvation Army discards, you would feel like a person apart.