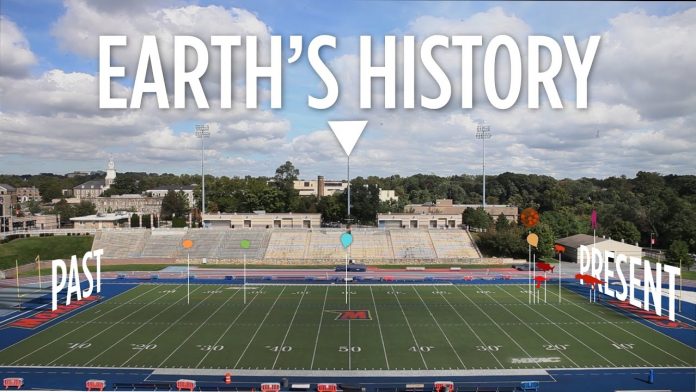 Grant Ernhart works with the U.S. Biathlon Team, so he spends a lot of time among snow-capped mountains. From the Canadian Rockies, he lobbed a question to Skunk Bear, NPR’s science YouTube channel.

“I’m standing next to some mountains that are millions of years old,” Ernhart said, “and the Earth is itself 4.5 billion years old. How do I even wrap my mind around that length of time?”

It’s a tough question. A human life is so short compared to the life of the planet. But wethey decided the perfect place to tackle this problem of perspective was out on a football field.

Morgan State University in Baltimore, Md., let us take over its stadium one fall afternoon before practice, and they used the gridiron as a giant timeline. The distance between the end zones – 100 yards – would represent Earth’s 4.5 billion-year history.