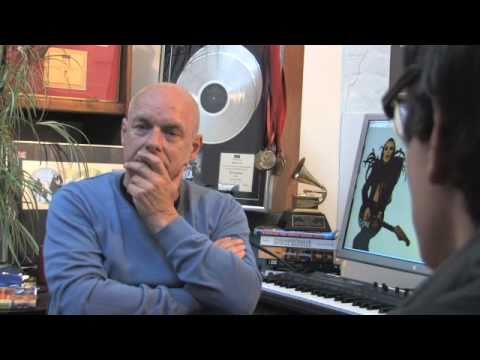 Today’s bizarre interview comes from the amazingly named Dick Flash from Pork magazine– who is really Eno in a wig and glasses — asks Eno exactly the kind of questions you would think of asking someone like Eno with excessive ease.

“I was going to ask you whether you thought technology had affected music very deeply,” Flash begins, “but then I thought, ‘Well, that’s a bloody stupid question to ask Brian Eno. I know you’ll agree that you just can’t imagine rock music without all the technology which goes into making it and getting it heard. How do you think that process has affected what you’re doing?”

“I mean, when you’re making music, what eventually comes out has almost nothing to do with performance at all. I mean, I wonder if you sometimes feel more like a painter than a composer.”

“The thing about this new record —”

“Because after all, your music is basically scenic. It’s not only that you make it more like a painter than a composer, but also, it doesn’t have a narrative. There’s no sort of teleological structure to it. It’s not goal-directed. Instead it’s a bit like a sort of emotional microclimate, a place more than an event. Does that make any sense to you?”

“I mean, I’m not trying to put words into your mouth, but the real question is, should this stuff be called music at all, or is it a new art form? Do you think that this and other media suffer from the carryover of their original names, when in fact they’ve changed into something completely different.”