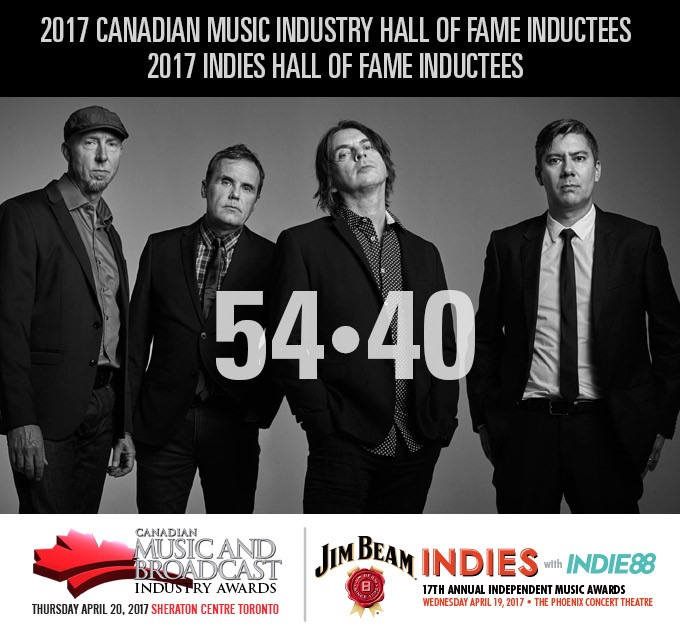 With more than three decades of performing and recording behind them, 5440 has an unbelievable catalogue of hit songs. Lead by chief songwriter Neil Osborne, 54•40 have carved out a legacy of gold and platinum albums and an outstanding reputation for their live performances that carries through to this day. Over 35 years, 2500 performances, and 17 album releases the secret to 54•40’s longevity is their ability to redefine and reinvent themselves.

54•40’s latest 2016 release La Difference: A History Unplugged, produced by Dave ‘Rave’ Ogilvie, is an intimate and unplugged reimagining of their greatest hits. 54•40 is currently preparing for their 2017 release entitled Keep On Walking.

The Canadian Music and Broadcast Industry Awards, hosted by Jessi Cruickshank on Thursday, April 20, 2017, will celebrate the best and brightest in all fields of the Canadian music and broadcast industries. Previously announced 2017 inductees to the Canadian Music Industry Hall of Fame include Jann Arden, Marilyn Dennis, RUSH and Arthur Fogel.

The Jim Beam INDIES with Indie88, hosted by Indie88’s Matt Hart and Josie Dye, celebrates the best of independent music – both Canadian and international. In addition to a special performance by 5440, Hollerado, The Wooden Sky, Repartee (nominated for Pop Artist/Group Of The Year), The Nursery (winners of the Jim Beam Make History Talent Search), and Dan Mangan (recipient of the Make History Award) will also perform.