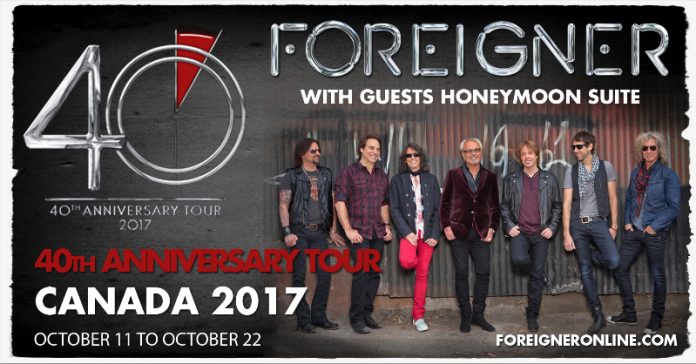 FOREIGNER, the band behind these and other classic and iconic songs, is turning 40 this year and celebrating with a Canadian tour, 40th Anniversary Album, and new musical; Juke Box Hero, premiering in Alberta sometime in 2018.

This tour will feature a companion album, a new career-spanning compilation titled 40 that features 40 hits from 40 years. RHINO will release 40 on May 26th as a double-CD set that includes 40 songs recorded between 1977 and 2017. A double-vinyl version that features 23 songs will be released on June 2.  40 brings together the best songs from Foreigner’s nine studio albums, including all 16 of its Top 30 hits: “Feels Like The First Time,” “Urgent,” “Waiting For A Girl Like You” and more. The collection features “Too Late” from the group’s 2008 retrospective No End In Sight and “The Flame Still Burns,” the title track from a vinyl EP released just last year, making its debut on CD in this collection. All prior recordings have been remastered and the album features two new tracks recorded especially for this release, “Give My Life For Love” and a new version of “I Don’t Want To Live Without You.”

Another milestone as part of Foreigner’s 40th Anniversary celebration is the announcement of the forthcoming musical, Juke Box Hero, premiering in Alberta in 2018. Based on the screenplay written by the prolific writing duo, Dick Clement and Ian La Frenais, responsible for films The Commitments and Across The Universe, and The Tracey Ullman TV Show, Juke Box Hero is a coming of age saga written to the music of Foreigner.

“I never could have imagined when I set out to create Foreigner forty years ago, that we’d still be touring around the world and performing the music we love all these years later,” says founding member and lead guitarist Mick Jones. “I am so proud that these songs will now be reinterpreted for stage, and am honored by the team that is helping bring this music to life. I can’t express the gratitude I feel when fans share stories of how our songs have been woven into their milestones and memories over the years.  I had so many great times with Foreigner in Canada and I look forward to bringing the band back here for our 40th anniversary tour.  I’m thrilled that Canada will see the premiere of our brand new musical, Juke Box Hero, in 2018.”

Since the 1977 release of their first hit “Feels Like The First Time” and their self-titled debut album on Atlantic Records, FOREIGNER has been universally hailed as one of the world’s most popular rock acts with 10 multi-platinum albums, 16 Top 30 hits, and worldwide album sales exceeding 75 million.  Responsible for some of rock and roll’s most enduring anthems including “Juke Box Hero,” “Cold as Ice,” “Feels Like The First Time,” “Urgent,” “Head Games,” “Say You Will,” “Dirty White Boy,” “Long, Long Way From Home,” and the worldwide #1 hit, “I Want To Know What Love Is,” FOREIGNER continues to rock the charts more than thirty years into the game.

Recent albums including Juke Box Heroes, a new compilation of digitally recorded Foreigner hits, and The Best of Foreigner 4 & More, recorded live from The Borgata, Atlantic City, both entered the Billboard Top 200 chart. Foreigner also featured strongly in every category in Billboard’s recently released “Greatest of All Time” listing.  Catalog sales often eclipse those of Aerosmith, The Rolling Stones, The Who, Def Leppard, Van Halen and most of their Classic Rock peers (Source: Nielsen SoundScan 2/11/16 – 2/3/16).

Check out the tour at any of the following stops. Fans can check out www.jeffparrypromotions.com/foreigner for updates on tour dates and news.