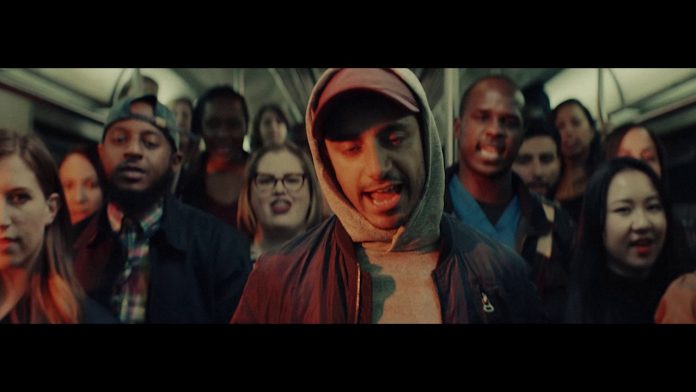 Hamilton Uptown/Atlantic Records has announced today’s release of an official companion visual to “Immigrants (We Get The Job Done),” directed by Tomás Whitmore and executive produced by Robert Rodriguez and Lin-Manuel Miranda, performed by K’naan, Snow Tha Product, Riz MC, & Residente of Calle 13, and featured on the groundbreaking #1 album, “THE HAMILTON MIXTAPE.” The visual was introduced this morning by HAMILTON’s Pulitzer Prize, Tony, GRAMMY and Emmy Award-winning creator Lin-Manuel Miranda on NBC’s TODAY. The “Immigrants” video is streaming now via http://www.today.com and the official HAMILTON YouTube channel.

The “Immigrants (We Get The Job Done)” visual arrives in time for an exclusive sweepstakes presented in association with Prizeo.com. Fans can enter the contest for as little as $10; with all proceeds benefiting the Immigrants: We Get The Job Done Coalition, an alliance of immigration-focused non-profits throughout the US assembled by The Hispanic Federation. One grand prize winner will be flown and housed with a guest for the long awaited Los Angeles opening of HAMILTON, the star-studded after party, and meet and greet with Miranda. For complete details, please see www.prizeo.com/Hamilton.

In addition, Miranda – with help from Stephen and Ayesha Curry – has also unveiled the #Ham4All Challenge, inviting fans, fellow artists, athletes, and other luminaries to support and raise funds for the Immigrants: We Get The Job Done Coalition by making a donation and singing their favorite song from HAMILTON and then challenging others to do the same. Entrants can then share their video across social media tagging #Ham4All, http://www.prizeo.com/Hamilton, and the subject of the challenge.

Miranda will continue to support the “Immigrants” visual as well as the Prizeo campaign and #Ham4All Challenge with a much-anticipated appearance on NBC’s Late Night with Seth Meyers, set for Thursday, June 29th (check local listings). As if all that weren’t enough, “Immigrants (We Get The Job Done)” also kicks off a special “Rise Up Eyes Up Wise Up” playlist created by Miranda and featured on the official HAMILTON Spotify.

“THE HAMILTON MIXTAPE” made a groundbreaking debut atop the SoundScan/Billboard 200 upon its release last year, entering the overall chart at #1 with 187,000 total album equivalent units – the greatest sales week for any compilation since 2012 and the first compilation to hit #1 since 2014.

“THE HAMILTON MIXTAPE” – which has received a wide array of praise from publications including Wall Street Journal, Entertainment Weekly, Rolling Stone and Complex, to name a few – was also heralded by a series of high profile television performances, with Kelly Clarkson offering an emotional rendition of “It’s Quiet Uptown” on NBC’s TODAY and The Roots teaming with Busta Rhymes and Joel Ortiz for an anthemic “My Shot” on NBC’s The Tonight Show Starring Jimmy Fallon.

The winner of the 2016 GRAMMY Award for “Best Musical Theatre Album,” “HAMILTON (ORIGINAL BROADWAY CAST RECORDING),” is available now in stores, DSPs, and streaming services. The 3x RIAA platinum certified album made a stunning arrival on the Billboard charts upon its initial digital release, coming in at #1 on the “Top Broadway Albums” chart, #3 on the “Top Rap Albums” chart, and #9 on the “Top Current Albums” chart. This impressive debut stands as the biggest first week sales for a digital cast recording and the second biggest first week sales ever for any cast recording, behind only “RENT” in the Nielsen SoundScan era. What’s more, “HAMILTON” debuted at #12 on the overall SoundScan/Billboard 200 based on strong album sales, track sales and over 2.1 million streams across all digital service providers. The cast recording’s success was exclaimed as “an eye-popping debut” by Billboard, noting other achievements including the “Largest Debut Sales Week for a Digital Cast Album” and “Highest Charting Cast Album Since 2011.”