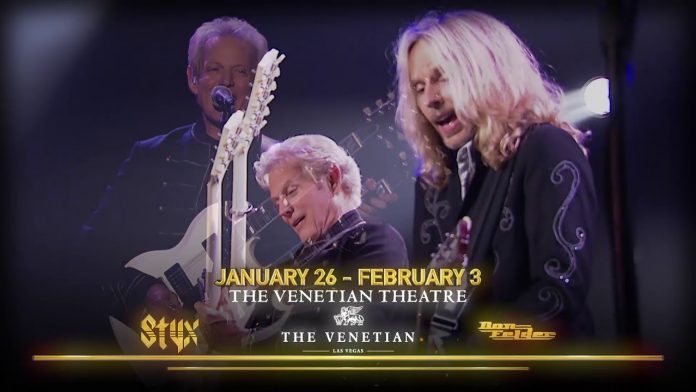 STYX and DON FELDER will be burnin’ up the Las Vegas Strip with their “Styx & Don Felder: Renegades In The Fast Lane” show presented by SiriusXM with another unforgettable five-night limited engagement at The Venetian Theatre inside The Venetian Las Vegas on January 26, 27, 31 and February 2, 3, 2018.

STYX’s and DON FELDER’s VIP packages and Artist pre-sale tickets go on sale Wednesday, September 20 at 10 a.m. PT/1 p.m. ET at Ticketmaster.com. Grazie loyalty members and Live Nation customers will receive access to a pre-sale beginning Thursday, September 21 at 10 a.m. PT. All presales will end Thursday, September 21 at 10 p.m. PT. Tickets go on sale to the general public on Friday, September 22 at 10 a.m. PT/1 p.m. ET, which start at $59, $79, $99, $139, and $299 for the front row, plus applicable fees. They will be available for purchase at Ticketmaster.com, venetian.com, any box office at The Venetian or The Palazzo, or by calling 702.414.9000 or 866.641.7469. For all news and information about both artists visit their official websites, Styxworld.com and DonFelder.com.

For these special performances, STYX–Tommy Shaw (vocals, guitars), James “JY” Young (vocals, guitars), Lawrence Gowan (vocals, keyboards), Todd Sucherman (drums) and Ricky Phillips (bass), along with the occasional surprise appearance by original bassist Chuck Panozzo—has created an exclusive set list and brand new stage production. DON FELDER is also working on some exciting plans of his own for the residency. The multi-show run will pay tribute to both STYX’s and DON FELDER’s combined 45-plus years as one of the most successful rock and roll bands in history and one of rock’s most illustrious guitar legends.

As STYX’s Tommy Shaw explains, “After our ‘Renegades In The Fast Lane’ residency earlier this year, we kept hearing the question, ‘Will there be more dates?’ Well the answer is, YES! We had such a great time trading stage time with Don Felder. First being his band playing a set from his former band, Eagles, and then having Don join us to play some STYX songs. Now we are returning for another round of shows!!!”

While STYX’s James “JY” Young is “Very excited to take the stage once again with our brother in arms, Don Felder, and be back at that amazing and beautiful theatre at The Venetian in Las Vegas. We had a blast last year and we are excited to go back. Viva Las Vegas!”

DON FELDER agrees, “I’m truly looking forward to returning to The Venetian with my buddies, STYX. We had such a great time last year, and we’re coming back again to rock it in January 2018. Two of my favorite things are playing with STYX and rocking in Las Vegas. Doesn’t get much better than that! Can’t wait to see you there.”

As Mike Weatherford of the Las Vegas Review-Journal wrote about 2017’s “Renegades In The Fast Lane,” STYX is “…today’s perennial Vegas showmen…every tune is impeccably played and spot-on in its musicianship…Of all the classic rock groups, STYX maybe left the most bread crumbs to a Las Vegas future with the camp Broadway flair of 1981’s PARADISE THEATRE.”

STYX – The multi-Platinum rockers would eventually transform into the virtual arena rock prototype by the late ’70s and early ’80s, due to a fondness for big rockers and soaring power ballads. Over the course of their 40-year career they’ve released 15 studio albums, six best-of compilations and four live albums, garnering eight Top Ten singles. STYX has sold over 30 million albums worldwide. Throughout their illustrious career, they’ve performed more live shows since 1999 than all of the previous years of its career combined. Two Super-Bowl appearances, Pollstar box office chart-topping tours with Def Leppard, Journey, Boston, and Bad Company (to name only a few), two more studio albums. September 2, 2016 marked the long-awaited release date of STYX: LIVE AT THE ORLEANS ARENA LAS VEGAS on DVD, Blu-ray and Digital Formats via Eagle Rock Entertainment. It captures the band performing in July 2014 such fan favorites as: “Too Much Time On My Hands.” “Fooling Yourself (The Angry Young Man),” “Renegade,” and more. It also includes a special surprise visit from DON FELDER for a rousing performance of “Blue Collar Man (Long Nights).” It was released on CD July 24, 2015. STYX continues to conquer the planet, one venue at a time.

DON FELDER, formerly of the Eagles, New York Times best-selling author and four-time Grammy® Award winner—released his second solo album (and first since 1983), ROAD TO FOREVER, on October 9, 2012 and has been on tour throughout the U.S. ever since. To coincide with the launch of “The Soundtrack of Summer,” the album was re-released with four additional songs, ROAD TO FOREVER: EXTENDED EDITION, via INGrooves Music Group. FELDER’s ROAD TO FOREVER originally debuted on Billboard’s “Heatseekers” chart at #27. “Girls In Black,” the album’s first single, reached the Top 30 on the Mediabase Rock chart while the second single, “Wash Away,” co-written by FELDER and Styx’s Tommy Shaw and featuring Shaw’s signature vocal sound, quickly jumped to #4 on the Mediabase Classic Rock chart. FELDER wrote or co-wrote all the songs and performs guitar and lead vocals on the album, which boasts a long list of iconic guest performers including: David Crosby, Graham Nash, Stephen Stills, Steve Lukather, David Paich and Steve Porcaro of Toto, Randy Jackson, Styx’s Tommy Shaw and others. It was produced by FELDER along with Robin DiMaggio (Posse 2.0 bandleader on the “Arsenio Hall Show,” United Nations’ Musical Director).