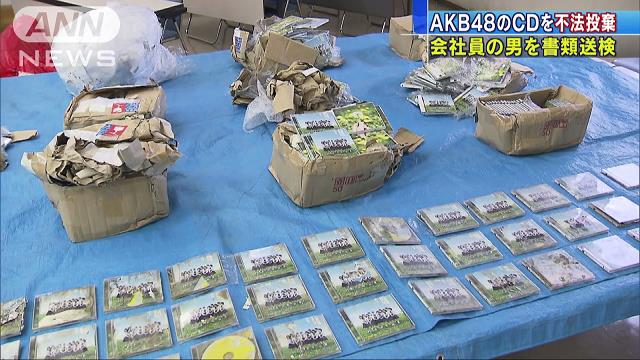 FUKUOKA (TR) – Fukuoka Prefectural Police have sent a male fan of all-girl pop group AKB48 to prosecutors for the alleged dumping of nearly 600 of the group’s compact discs in the mountains of Dazaifu City, a crime committed after the defendant submitted votes for his favorite members.

On Monday, the Chikushino Police Station sent the man, 32, to prosecutors at the Fukuoka District Court on suspicion of violating the Waste Disposal Law over the dumping of 585 copies of the same AKB48 CD single in a forest in the middle of June.

“I dumped the CDs in the mountains to dispose of them after extracting the voting ballots necessary for the General Election,” the defendant was quoted by police.

The defendant received the CDs from another male fan of AKB48 in Chiba Prefecture, who shipped around 1,000 discs — valued at a around 1 million yen — in about 20 cardboard boxes to him in May and June after explaining he was unable to carry out the necessary voting himself.

After receiving the discs, the defendant and two accomplices worked together at an unspecified location in Fukuoka City to pull out the ballots contained inside the plastic cases on the night of June 9. They then input the serial numbers on the ballots into a web site that allowed them to vote for their favorite members of the group.

After the work was completed, the defendant took 11 of the boxes containing about 600 CDs to his residence. After dumping some of them in the trash, he took the remainder to the mountains in Dazaifu for disposal.