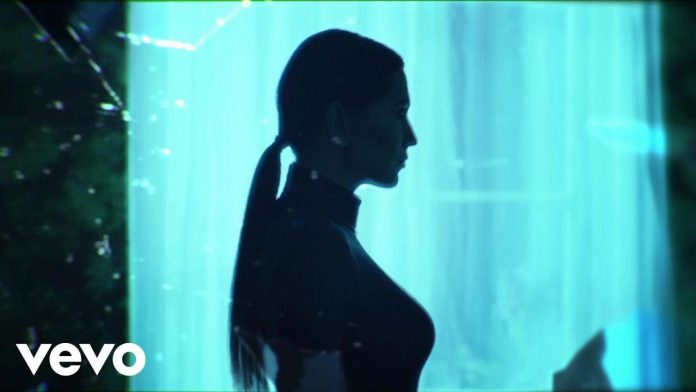 Best known to her 22,000+ Instagram fans as a fashion-forward woman with brains and talent to spare, Montreal-based singer/songwriter Polina Grace has just released her new EP — Down — available now through SONY Music.

The first video — ”Down” — has the dynamic pop powerhouse performing all her own stunts to what results in an action-packed, intriguing, spy-glam thriller. The messaging is sung beautifully loud and melodically clear: self-empowerment, fortitude, and determination.

Between her degree in commerce and psychology, plus being fluent in four languages, Polina makes for a fascinating interview on how she leveraged social media and her modelling career to personally finance her dream of songwriting and singing full time.

“Every song is representative of strength, and very personal to me,” shares Polina, who co-wrote three of the original songs on Down. “I believe in being the protagonist of your own life and that is what I’m looking to portray with my songs, lyrics, production, and visuals. It’s all about empowering people — especially young women — to pursue their dreams and to ‘give up on giving up. It’s about not letting anyone drag them ‘down’ and to cast doubts and haters away by leaving them ‘in the shade.’

“Once the concept was conceived, I began physically training, watching fight videos, and taking lessons at TriStar Gym in Montreal to learn proper kickboxing and MMA moves,” recalls Polina Grace on the making of “Down.” “My coach pushed me to my limit every training session and really instilled a sense of a “fighter” in me. The amount of time I had to train was only about two or three weeks prior, but I learned some of the fundamentals of the MMA craft which prepped me for the next phase — stunt training.”

Training with Kevin Kelsall, an experienced stuntman based in Montreal, was a journey of its own for Polina. “I only had two rehearsals with him, but he was an incredible choreographer,” she shares. “In the video where he throws me onto his shoulders and flips me onto the bed was not a simple move to do with the limited training I had. Kevin said his stuntmen friends were surprised he would do a move like that with “a singer,” but he trusted I could handle it, and more.

“At one point on set, I recall telling him “Kevin, punch me in the side harder. Just do it for real!” He laughed and said I was crazy. I suppose I am a little!”