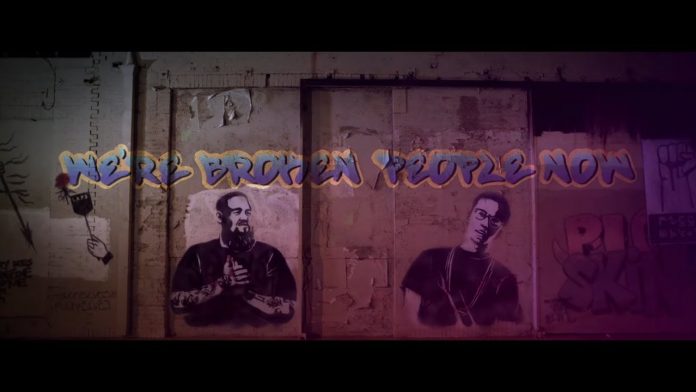 Atlantic Records has unveiled another exclusive track from BRIGHT: THE ALBUM, the official companion to the upcoming Netflix blockbuster film Bright, starring Will Smith and Joel Edgerton. Fresh off his multiple GRAMMY nominations, Logic has teamed up with Rag’n’Bone Man for “Broken People,” the newest track off of BRIGHT: THE ALBUM, available now via all DSPs. An accompanying visual content piece created by the animators of Bright’s opening title sequence is also available today and can be viewed below. BRIGHT: THE ALBUM arrives at all music retailers and streaming services on Friday, December 15th; Bright premieres Friday, December 22nd on Netflix.

Today’s release of “Broken People” follows the release of “Home” by the incomparable trio of Machine Gun Kelly, X Ambassadors & Bebe Rexha which in addition to climbing the charts, just last week received a heart-warming companion video directed by acclaimed Bright director David Ayer. Watch the video, which features actual cast members, including cops and orcs from Bright, and follows Machine Gun Kelly through an emotional journey as he returns home after being released from incarceration below.

“Home” debuted following the first two tracks released from BRIGHT: THE ALBUM: “World Gone Mad” by Bastille and “Darkside” by Ty Dolla $ign & Future (Feat. Kiiara); the three tracks have amassed over 23 million global streams in the first two weeks. The videos can currently be seen on Netflix in the anthology BRIGHT: THE MUSIC VIDEOS.

The final song to be released prior to street date is “Danger” by Migos & Marshmello, which will arrive December 7th, joined by the premiere of an action-packed new companion visual featuring never-before-seen footage from Bright.

Logic – the 27-year-old rapper born Sir Robert Bryson Hall II – broke free from the pack with his debut album Under Pressure in 2014. Hailed as one of the year’s finest hip-hop debuts, Huffington Post crowned Under Pressure “2014’s Best Hip-Hop Album So Far,” iTunes named it “Best Hip Hop Album 2014,” Artist Direct called it “The Best Debut of 2014,” and MTV News nominated it as “Rap Album Of The Year Contender.” Logic’s monster 18-track long-player The Incredible True Story (November 2015) crafted a sci-fi space odyssey script that developed throughout the interludes on the album, and cemented Logic’s status as one of music’s most creative young MCs. His 2016 Incredible World Tour crisscrossed the U.S. and Canada from February through April. “Bobby Tarantino,” his summer 2016 mixtape, upped the ante, as Billboard declared “Logic heats up the summer with a new banger,” while additional raves were piled on by Pitchfork, Spin, and Complex. His most recent effort, Everybody debuted at #1 on the Billboard 200 Album Chart in May and contained his smash hit “1-800-273-8255” (National Suicide Prevention Lifeline). The incredibly powerful track, which features Alessia Cara & Khalid, remained in the Top 5 of the Billboard Hot 100 for nine weeks and amassed over 500 Million streams making it Logic’s biggest hit to date. Everybody led to a sold-out headline North American and European amphitheater tour as well as first MTV VMA Award wins.

Without a doubt 2017 has been the year of Rag’n’Bone Man. His album ‘Human’ has become the decade’s fastest-selling debut album so far by a British male selling over 820,000 copies in the UK (2.3 million worldwide) and been the second biggest seller in the UK only behind Ed Sheeran! It contains the global hits ‘Human’, which has gone to Number 1 on iTunes in over 40 countries selling nearly five million copies in the process (turning gold in the US), and ‘Skin’, which has sold over 1.9 million globally. The 2017 double Brit Award winner has played sold out shows across Europe and the UK including three nights at London’s Brixton Academy. This summer saw him playing IOW Festival, Glastonbury, TRNSMT and Bestival and 2018 will see him play his biggest show to date at Alexandra Palace.