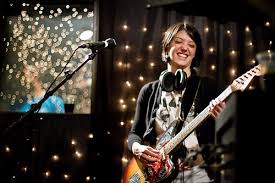 Sharon Van Etten’s latest album because i was in love tends to get overlooked in Sharon’s discography, but it was the blueprint for what fans have grown to love about and expect from her. The lyrics were personal enough to tell her story but also universal, a blank canvas on which you could sketch your own desires and fears.

To hear Sharon tell it, because i was in love documented an innocent time, a specific moment in her 20s when her songs doubled as her journal (they still do). After a college stint in Tennessee, she had moved home to New Jersey, living with her parents and recording hundreds of songs in their basement on her laptop’s internal mike. She burned CD-Rs of her latest demos, which she’d give out at her shows in bars scattered across Brooklyn and New York. She worked at a wine store back then, and paper bags with holes in them ended up becoming DIY album artwork. If someone sent her an email to say her music had hit a nerve, Sharon made sure she wrote back.

That’s about as big as she dreamed. She wanted to connect with people by making music that was an act of both expression and self-exploration. And that’s still the heart of what Sharon values as an artist.

I remember when you worked as a publicist. Was it a difficult? You’re promoting other people’s music, but you likely just wanted to work on your own.

Yeah, I mean, I have to say Ben (Goldberg) is one of the most beautiful people I know. He has a heart of gold, that guy. I feel very lucky… I started as an intern and one of my friends that I went to college with at Middle Tennessee State was his assistant. She was teaching me what she was learning along the way, too. I had just moved to New York and was working at a wine store. I was interested in the business side of things because I knew that one day, I wanted to put out a record. I knew that I was so far from that when I started working. I didn’t even want him to know I was a musician, so I didn’t tell him. Then I was hand-making CDs out of my house and learning what blogs were. I had no idea.

I know it sounds silly, but it wasn’t like I was an employee for a little while. He hired me after some time, but I had no idea what I was doing. I had no real aspirations other than, I love music and I love playing. I wasn’t thinking of starting a real career. I just felt lucky to be able to live in New York and play at these dive bars at one in the morning. At the time, I just wanted to figure out how to keep a job and how to live in New York. Working at a label seemed really fun and working with my friend, and at the time Beirut’s following was growing so fast. I learned a lot because it happened at a really fast rate.

Sometimes bands grow so fast and then shoot back down just as quickly. You can learn a lot from watching a band grow quickly—what to do and what not to do.

Absolutely. I’ve always been a fan of the slow build. Whether it be with my career, or my songs, or life. Just growing at a slower rate. When I look at bands today, where it is like the SoundCloud phenomenon or whatever, it’s like you have one really big song and you get a record deal. Then that record does well because of that one song, but then you set the bar so high for yourself starting out, that the pressure’s too much. It’s much harder on kids today.

I’m in my 30s, so I’m not like a grandma by any means, but I feel like it’s happened at such a rate that I don’t even know what the music industry is, or how people find music anymore. I don’t know how kids don’t feel pressured after they have a successful song, let alone if one album’s successful. The kind of pressure that’s put on them by labels now… I feel bad for them.