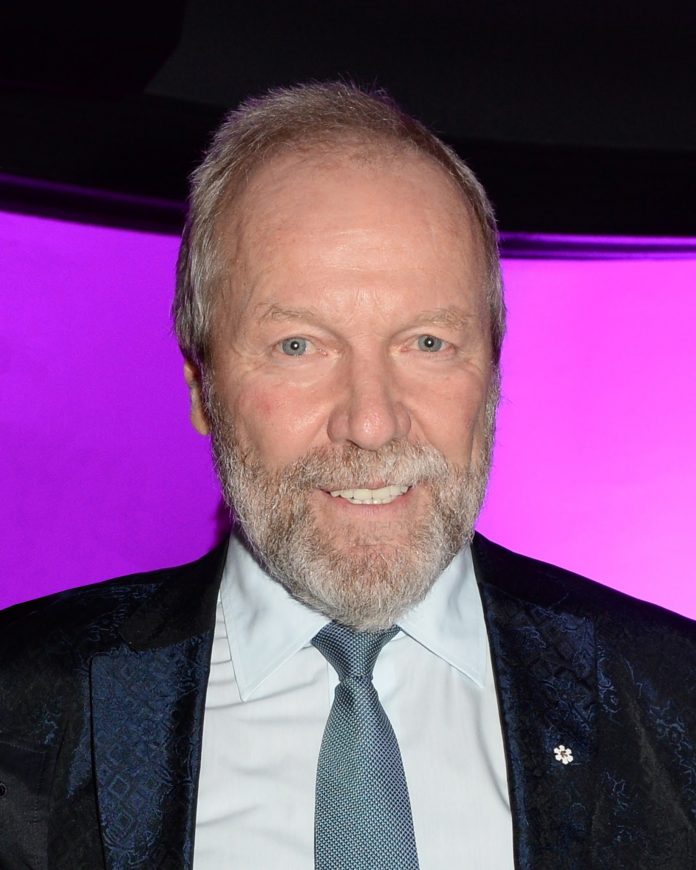 The Canadian Academy of Recording Arts and Sciences (CARAS) today announced that broadcast and music industry leader and philanthropist Gary Slaight will be honoured with the 2018 Humanitarian Award. Slaight personifies the essence of the award through his devotion to Canadian music and emerging Canadian artists as well as his philanthropic support of health care, social service, culture and at-risk youth at home and abroad.

Given out annually at the JUNO Awards, the Humanitarian Award celebrates and recognizes the philanthropic efforts made by Canadian artists or industry leaders who have made a positive impact on social welfare worldwide. This year’s award will be presented at the JUNO Gala Dinner & Awards Presented by SOCAN on Saturday, March 24, 2018, at the Vancouver Convention Centre in Vancouver, British Columbia.

“I am truly honoured to be this year’s recipient of the Humanitarian Award,” said Slaight. “Our family has had a tradition of giving back to the community that transcends from my parents Allan and Ada Slaight. The Slaight Family Foundation, created as a result of the sale of Standard Broadcasting, is a tribute to my parent’s commitment to community and of which I am proud to lead. Whether it is supporting a local music program for children or helping to advance key health care priorities, our goal is to make a positive difference on the lives of those around us and those needing our support globally. We truly want to make an impact and help those who need it the most. “

“We are honoured to present Gary Slaight with the Humanitarian Award,” said Allan Reid, President & CEO, CARAS/The JUNO Awards and MusiCounts. “His commitment to helping others and continued selflessness places him in a category of his own. Gary’s dedication to making the world a better place is truly inspiring; from The Slaight Family Foundation’s work with charities to his support for emerging artists, and music industry organizations like MusiCounts and Unison Benevolent fund, Gary has dedicated his time and resources to providing others with the opportunity to grow. We look forward to commemorating Gary’s philanthropic work at the 2018 JUNO Awards.”

Born in Edmonton, Alberta, Slaight began his career as Media Estimator for McLaren Advertising. After several years in the industry, including serving as General Manager of Toronto’s trail-blazing Q-107, he led the team at Standard Radio as President, developing a growth and expansion strategy for the company from seven radio stations in 1987 to 52 in 2007. Gary helped bring satellite radio services to Canada in 2005 with the establishment of Sirius Satellite Radio Canada, through a partnership between Slaight Communications, CBC and Sirius Satellite Radio.

After the sale of Standard Broadcasting to Astral Media, Allan and Gary made the decision that proceeds from the sale would be directed to philanthropic initiatives with the establishment of The Slaight Family Foundation and towards supporting the Canadian music industry and emerging artists through Slaight Music.

As a visionary, philanthropist and industry leader, Slaight has illustrated his passion for supporting Canadian artists through the creation of Slaight Music’s It’s Your Shot, as well as the Canadian Radio Music Awards. His ongoing efforts have led to the development of the Polaris Music Prize via The Slaight Family Heritage Prize, The Slaight Family Music Lab at the Canadian Film Centre, The Allan Slaight Stage at Massey Hall, The Allan Slaight JUNO Master Class, Canadian Music Week Allan Slaight Humanitarian Spirit Award and The Canadian Songwriters Hall of Fame via The Slaight Music Emerging Songwriter Award.

Slaight has furthered his commitment to making a difference through The Slaight Family Foundation and its ongoing support of initiatives at local and international levels. With an innovative approach to philanthropy, the foundation provides long-term support to several organizations simultaneously to maximize services in a designated sector or to address an urgent need in the community.

Recent Slaight Family Foundation initiatives include: $50M to five Toronto downtown hospitals to improve health services; $7M to seven NGOs to increase their capacity to address international issues of poverty, HIV/AIDS, human rights abuse, and improving the development of women and girls; $11M to 11 Canadian national charities supporting the healthy development of children across Canada; and $12 million to 15 not-for-profit organizations working to improve the physical, mental and social well-being of Canada’s Indigenous populations.

Frequently recognized by his peers, Slaight’s accomplishments further demonstrate his dedication to global betterment: Slaight was named Broadcast Executive of the Year at the Annual Music Industry Awards by Canadian Music Week (1992, 1993, 1996, 1998); he was celebrated by the Canadian Association of Broadcasters with the Award for Outstanding Community Service by an Individual Broadcaster (2004); Slaight was inducted into the Canadian Music Industry Hall of Fame (2005); and was the recipient of the Walt Grealis Special Achievement Award (2012) and 2016 SOCAN Special Achievement Award. Philanthropic awards include the 2013 Business for the Arts, Edmund C. Bovey Award and the 2017 Association of Fundraising Professionals Outstanding Foundation Award.

In 2014, Slaight was appointed a Member of The Order of Canada in acknowledgment of his philanthropic work as President of The Slaight Family Foundation and for his commitment to supporting the arts in Canada through Slaight Music.

Gary lives in Toronto with his wife Donna, who is also a dedicated philanthropist. They have two daughters: Ali, who works at Slaight Music; and Chrissy, a researcher in the film business.