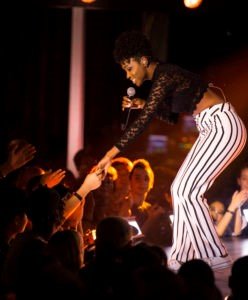 THE LAUNCH cracks the code, unlocking independent Toronto R&B singer/songwriter Jayd Ink, who was chosen from among the episode’s featured artists on tonight’s episode of CTV’s THE LAUNCH to record the new original single “Codes.” The series’ fifth single was released to radio stations across the country immediately following tonight’s broadcast, and is also now available to buy and stream everywhere, including iHeartRadio, Apple Music, iTunes, Spotify, and Google Play.

After putting her personal stamp on the song by adding a distinct reggae/R&B flair, mentors including Grammy-nominated Best New Artist of the Year Julia Michaels, Grammy-nominated record producer Ian Kirkpartick, and record mogul Scott Borchetta chose to launch Jayd Ink’s music career with her unique and captivating version of “Codes.”

Last week, in addition to THE LAUNCH charting its fourth consecutive #1 single at iTunes Canada with Episode 4’s chosen artist POESY’s “Soldier of Love”, the series also celebrates the milestone of surpassing more than 2.3 million streams globally for the original songs launched to date, including Logan Staats “The Lucky Ones”, Elijah Woods x Jamie Fine’s “Ain’t Easy”, and The Static Shift’s “Wide Awake”.

“I’m thrilled to have had the life-changing opportunity to be mentored by Julia Michaels, Ian Kirkpatirck, and Scott Borchetta,” said Jayd Ink. “I am honoured to engage in the process of artistic collaboration with these superstar industry talents. The process of taking this pop record and transforming it into an R&B record tailored to my style is something I am so proud of. Launching ‘Codes’ is going to open up so many doors.”

“Jayd has the artistry, she just needed the team,” said Scott Borchetta. “It is now our job to get Jayd where she’s meant to be…to the top! She really did make ‘Codes’ her own and I am pretty blown away by the result.”

Streaming now on various platforms including CTV.ca, CTV GO, and CraveTV™, THE LAUNCH: DIRECTOR’S CUT features the extended auditions of Zack Lane, Noelle Maracle, and the newly launched Jayd Ink, as well as, James Marshall and Nicky MacKenzie, who are featured exclusively in the On Demand version of the episode. The special edition also features comprehensive mentor reactions, feedback, and never-before-seen moments from THE LAUNCH that take the viewer deeper into the once in a lifetime opportunity for each of the artists.

Following an exhilarating audition process before the celebrity mentors, aspiring artists Jayd Ink and Zack Lane emerged as the two breakthrough artists chosen to perform and make the original song “Codes” their own.

After a collaborative 48 hours in studio rehearsals, recordings, and working with the episode’s celebrity mentors, the final artists took the stage in front of a live studio audience to perform their interpretations of “Codes.”

Two, uniquely tailored renditions of the song resulted in captivating performances by both aspiring artists, but following intense deliberations, Jayd Ink was ultimately chosen for the opportunity of a lifetime – to have her version of the song “Codes” launched across Canada and to the world via THE LAUNCH’s expansive slate of top music partners.

Following tonight’s song launch, Bell Media is poised to throw the full weight of its marketing, promotional, and publicity support behind Jayd Ink’s “Codes” across its national footprint of broadcast and digital entertainment properties.

As an independent artist, Jayd Ink has accomplished a great deal of success with her music. The Toronto born R&B singer-songwriter has been releasing music since 2013, with her background in poetry allowing her to effortlessly move through a myriad of musical genres. Jayd has been headlining shows in Toronto since the release of her first EP “Invitation Only” in 2015.