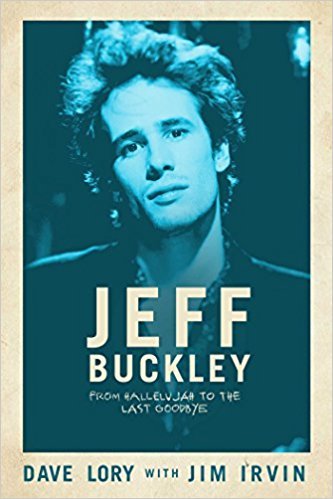 Jeff Buckley: From Hallelujah To The Last Goodbye just might be the definitive book on iconic cult hero Jeff Buckley, the singer who made just one record but inspired a generation of rock musicians. Written by his manager Dave Lory, Jeff Buckley includes interviews with others who worked closely with him who have never spoken before.

For the first time since Jeff Buckley’s untimely death on May 29, 1997, his manager Dave Lory reveals what it was like to work with one of rock’s most celebrated and influential artists. Go on the road and behind the scenes with Jeff, from the release of his debut EP Live at Sin-é to the second album Buckley never completed.

Jeff Buckley includes testimony from the many people who worked closely with Jeff both on and off stage and includes never-before-shared intimate scenes that only Lory witnessed, including what went down immediately after Lory got that fateful call, “Jeff is missing.”

Dave Lory has enjoyed a diverse career in arts and entertainment for over 35 years. Starting as a drummer and a roadie, he rose to becoming a respected manager, record company executive, and event producer across every genre from country to rap. Apart from Jeff Buckley, whom he managed from the release of his first EP in 1993 until his sudden, tragic death in 1997, Lory also helped guide the careers of The Allman Brothers Band, Courtney Love, and Duncan Sheik. He produced some of America’s most iconic music events including The Songwriter’s Hall of Fame, and the New York New Music Seminar. As Sr. Vice President, of international marketing and artist development at Mercury Records, he worked with KISS, Cake, Elvis Costello, and Warren Zevon.

Jim Irvin, born and raised in west London, has been in the music business as a performer, songwriter, and journalist for many years. During the 1980s he fronted British indie band Furniture. In 1990, he switched to music journalism, becoming reviews editor for the long-running UK weekly Melody Maker, where he first saw and wrote about Jeff Buckley. In 1994, Jim became the founding features editor of MOJO magazine, where he contributed major pieces on, among others, R.E.M, Radiohead, Talk Talk, The Beatles, and Sandy Denny. In 1997, Jim wrote “It’s Never Over,” a piece on Jeff Buckley’s life, through which he met Dave Lory. He has also contributed to Rolling Stone, The Times, and The Guardian. In 2001, Irvin left the MOJO staff (though he continues to write regularly for the magazine) to return to music creation, becoming a songwriter and producer. He has written with Lana Del Rey, Lissie, David Guetta, Nothing but Thieves, Simple Plan, Gavin DeGraw, and many other artists.