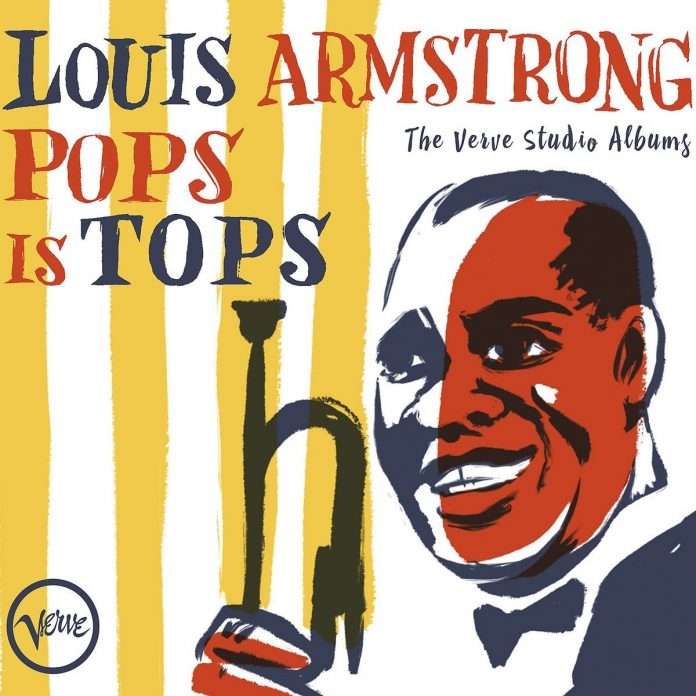 In the summer and fall of 1957, Louis Armstrong, already one of the most important musicians of the 20th century, had one of the most prolific periods of his spirited career. In addition to recording the follow-ups to his highly successful duets album with Ella Fitzgerald, Ella And Louis Again and Porgy and Bess, Armstrong recorded three albums for Norman Granz’s newly minted Verve Records across a handful of incredibly productive sessions. For the first time, these records – I’ve Got The World On A String, Louis Under The Stars, both recorded with the Russ Garcia Orchestra, and Louis Armstrong Meets Oscar Peterson, plus the previous digital-only release A Day With Satchmo – have been collected together as Pops Is Tops: The Verve Studio Albums, a new four CD and digital box set from Verve/UMe available on April 13. With Granz supplying the cream of the crop of the Great American Song Book and first-class backing, Armstrong’s Verve recordings constitute the definitive portrait of the artistry of his singing. They are presented in their original mono masters – the first time since the original vinyl releases – and include the original liner notes as well as extensive liners, recording and track info by foremost Armstrong authority Ricky Riccardi, Director of Research Collections for the Louis Armstrong House Museum and author of “What A Wonderful World: The Magic of Louis Armstrong’s Later Years.” Each disc also contains a wealth of bonus material featuring alternate takes from the sessions. Preorder is available now and the digital version includes an instant grat download of “Sweet Lorraine” from Louis Armstrong Meets Oscar Peterson.

Armstrong’s classic duets with Ella Fitzgerald will also be released as a new four CD and digital set titled Cheek To Cheek: The Complete Duet Recordings, on April 6. The 75-track collection gathers their three timeless Verve albums – newly remastered versions of Ella and Louis, Ella and Louis Again and Porgy and Bess – along with all of their Decca singles, live recordings from Jazz at the Hollywood Bowl, recorded as a warmup for Ella and Louis, plus several alternates and false starts from the Decca and Verve eras, illuminating their craft and good humor. Cheek To Cheek also includes unreleased material: “The Memphis Blues,” with Bing Crosby, from his radio show; several takes of Armstrong’s solo showcase, “Bess, Oh Where’s My Bess;” and an instrumental mix of “Red-Headed Woman.”

By 1957, Armstrong was the most popular and influential musician in jazz history. Famous worldwide as Satchmo and Pops, Armstrong had revolutionized jazz in the 1920s with his superb trumpet playing which helped to change jazz from an ensemble-oriented music to one that featured exciting soloists. His phrasing on both trumpet and his very distinctive voice uplifted and swung every song that he interpreted. In the 1930s and early 1940s when he led a big band, Armstrong the entertainer blossomed. He was not only universally known for his musical abilities but as a joyful and witty personality who could be seen in occasional movies. In 1947, he broke up his orchestra and formed his sextet Louis Armstrong and the All-Stars, becoming a world traveler who was nicknamed Ambassador Satch. He introduced millions of listeners to his brand of New Orleans jazz.

Armstrong first worked with Granz and his Verve label at a concert at the Hollywood Bowl on August 15, 1956. Over the next year, he was featured on three classic projects with Ella Fitzgerald. Granz, who wanted to document Armstrong in different settings than his usual one with his All Stars, also recorded him on five extensive sessions in 1957 that cast a different light on his talents.

During August 14-16, 1957, Armstrong and an orchestra arranged by Russ Garcia recorded enough music to fill two albums which were originally released as I’ve Got The World On A String and Louis Under The Stars. As Granz had planned, Armstrong performs a variety of songs that he had rarely sung before including “You’re The Top,” “You Turned The Tables On Me,” “Little Girl Blue” and “We’ll Be Together Again.” He consistently comes up with fresh variations of the swing era songs, many of which he had missed recording the first time around. The first disc of Pops Is Tops not only has the ten selections that comprised I’ve Got The World On A String but also includes eight alternate takes.

The original liner notes to Louis Under The Stars reveals the thought behind the record. “There isn’t much that one can say about this kind of an album, except to suggest that this is an emotional experience of the best-known and best-loved figure in the history of jazz doing some of the most beautiful songs ever written with a background not customarily thought of in terms of his artistry, but which nonetheless beautifully complements the soul and feeling of this great human being.” The recordings don’t disappoint and include highlights like “Have You Met Miss Jones,” “I Only Have Eyes For You” and “East Of The Sun,” each of which received a fresh and heartfelt interpretation from Armstrong. The eight song album is bolstered by six additional bonus tracks.

Louis Armstrong Meets Oscar Peterson from October 14, 1957 teams Armstrong with the brilliant pianist Oscar Peterson, guitarist Herb Ellis, bassist Ray Brown and drummer Louie Bellson. On such songs as “That Old Feeling,” “Let’s Fall In Love,” “I Was Doing All Night,” “Moon Song” (which has a particularly memorable trumpet solo) and “Just One Of Those Things,” Armstrong gives new life to the veteran standards, swinging the music while doing justice to the lyrics. Four bonus cuts including an instrumental version of “Indiana” are also included on the disc.

On August 1, 1957, Armstrong and the same Peterson Quartet recorded four numbers for the Ella and Louis Againrelease: “Makin’ Whoopee,” “I Get A Kick Out Of You,” “Let’s Do It” and “Willow Weep For Me.” The many alternate takes that resulted were formerly only available on the digital release A Day With Satchmo. This set marks the first time the entire contents of the August 1 session tapes are out in any physical form.

As Riccardi writes in the liners: “Armstrong’s Verve recordings are unlike any others in his discography and Granz must be given full credit for taking jazz’s greatest genius, surrounding him with the finest rhythm sections, giving him nothing by timeless tunes, and stepping aside to let Armstrong’s vocal and instrumental magic take over. In the midst of a punishing schedule and occasionally fighting a losing battle with his legendary lip, Armstrong nobly overcame it all to create some of the most timeless recordings of his career.”

Video from 1985: The 30-Minute Cartoon Featuring Nothing But The Music Of Rush