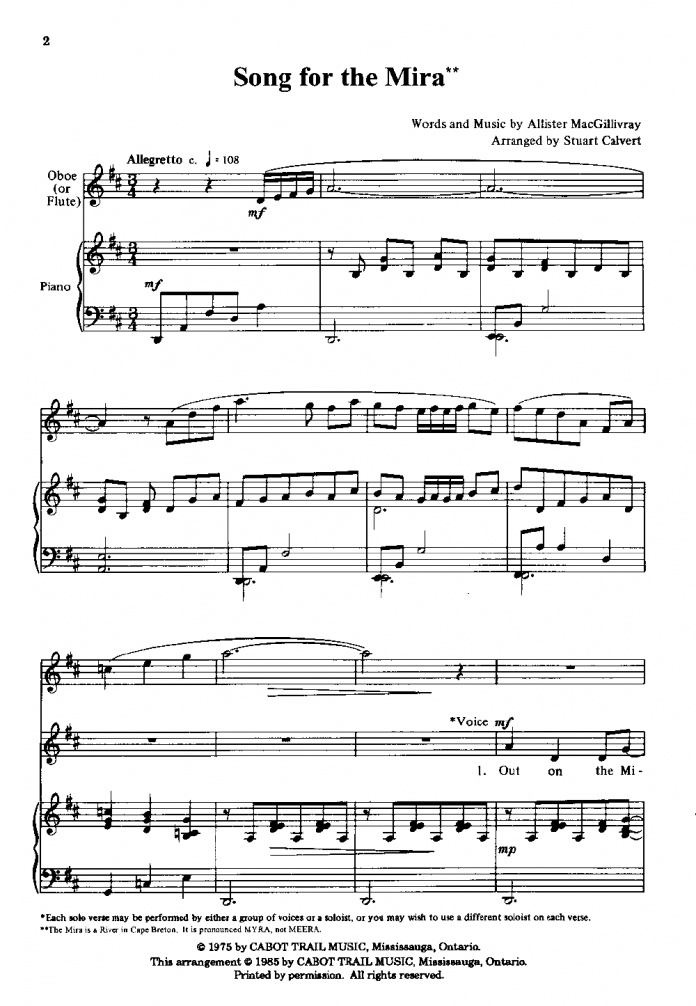 The Canadian Songwriters Hall of Fame is pleased to announce a new partnership with the East Coast Music Association, beginning at this year’s East Coast Music Awards: Festival & Conference in Halifax. The two organizations will partner each year to induct a new song written by an East Coast artist into the Hall of Fame, celebrating those who have helped shape the unique sound of East Coast music. This year we are pleased to announce the induction of “Song for the Mira” by Allister MacGillivray, that has made the secluded, picturesque Cape Breton community of Marion Bridge and its Mira River famous the world over.

The induction award will be presented to MacGillivray during the East Coast Music & Industry Awards on Sunday, May 6, at 7:00 p.m. in the Nova Scotia Ballroom of the Halifax Marriott Harbourfront Hotel. It will also be performed by legendary Cape Breton artist Heather Rankin.

Allister MacGillivray is a Cape Breton Islander (born in Glace Bay), and is a graduate of both Xavier College and St. F.X. University. A songwriter, guitarist, folklorist, author, and record producer, he has served as music director for Celtic television programs out of St. John’s and Halifax. As an accompanist, he has toured internationally with noted traditional musicians such as Tommy Makem & Liam Clancy, John Allan Cameron, and Ryan’s Fancy, and also worked for a short time with Canadian songwriter Gene MacLellan.

MacGillivray’s peaceful Celtic ballad “Song For the Mira” was recognized by Billboard magazine as a folk classic, and is a favourite song with roots musicians and choirs in Atlantic Canada and far beyond having been translated into Scots Gaelic, Italian, Japanese and several other languages.

“We’re very excited to partner with the Canadian Songwriters Hall of Fame, especially during our 30th Anniversary event. As we celebrate the best of today’s East Coast artists, it’s also appropriate to look back and recognize accomplished songwriters in our region’s history,” says ECMA Executive Director Andy McLean. “Allister MacGillivray’s ‘Song for the Mira’ is a beautiful composition that embodies our East Coast culture, and we’re very proud to be a part of its induction into the Hall of Fame.”

“The Canadian Songwriters Hall of Fame is partnering this year with our country’s most vibrant music festivals and events to honour the musical heritage of those regions,” says CSHF Executive Director Vanessa Thomas. “We’re thrilled to induct Allister MacGillivray’s iconic ‘Song for the Mira’ into the Hall of Fame, and to be there to celebrate with him, and our partners at the ECMAs, in the province that inspired him.”

Known also by the title “Out On the Mira,” the song has been performed or recorded especially by Nova Scotians such as Denny Doherty, The Men of the Deeps, and Symphony Nova Scotia; by other Canadian acts, such as Amy Cervini, John McDermott, The Elmer Iseler Singers, and The Canadian Tenors; and by Irish singers Foster & Allen, Mary O’Hara, Daniel O’Donnell, and Celtic Thunder. The song was popularized outside of Canada by Nova Scotian icon Anne Murray, who recorded the song on her gold-selling 1982 album Hottest Night of the Year. With Murray’s support, the tune reached international stardom.