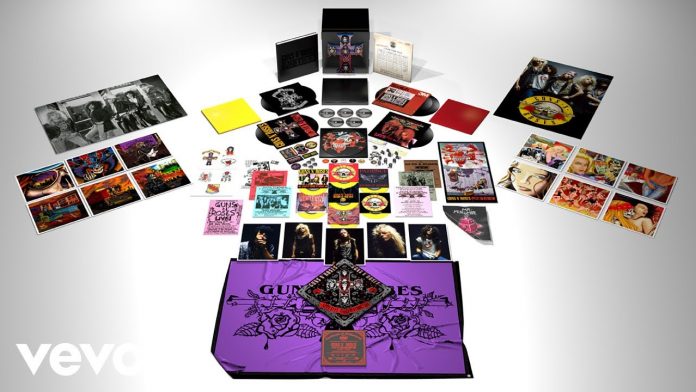 Guns N’ Roses’ Appetite for Destruction is set for a major upgrade. As anticipated, the band announced that Deluxe, Super Deluxe and a massive “Locked N’ Loaded” versions of their landmark 1987 debut album will be released on June 29.

The Super Deluxe Edition contains 73 tracks, 49 of which have never been released, spread out over four CDs. This includes one disc of B-sides and EPs, and two discs containing 25 songs from their famed 1986 sessions at Los Angeles’ Sound City Studios and two tracks (“Shadow of Your Love” and an acoustic version of “Move to the City”) from another session with producer Mike Clink. There is also a Blu-ray with 5.1 surround mixes of the original album, five bonus tracks and five music videos, including an unreleased clip for “It’s So Easy.”

In addition, the set contains a 96-page hardbound book with unreleased photos from Axl Rose’s archive and memorabilia, including lithos of the band members and Robert Williams’ controversial original cover, a wall poster, a “Welcome to the Jungle” video invite flyer originally drawn by Slash, replica ticket stubs and temporary tattoos. It’s housed in a simulated-leather wrapped slipcase with embossed logos.