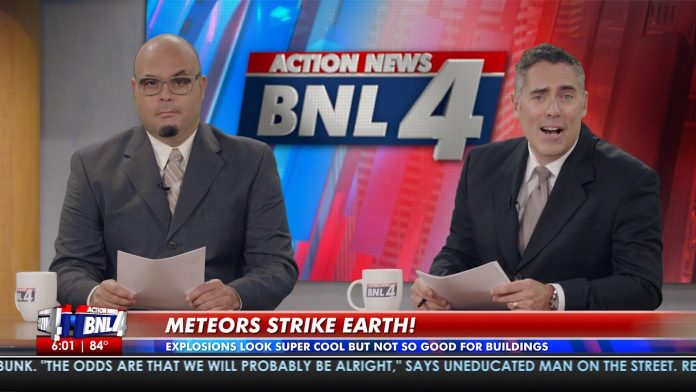 As one of Canada’s most unique and acclaimed international acts of the past 30 years, Barenaked Ladies carved out a legacy with their irreverent sense of humour and blend of pop, folk, alt-rock, and even rap. They have produced 15 studio albums—including their latest 2017 release, Fake Nudes—that have collectively sold more than 15 million copies.

The band has won nine JUNO Awards, earned multiple Grammy nominations, penned No. 1 single in the U.S. “One Week,” along with beloved hits “It’s All Been Done,” “Brian Wilson,” “If I Had $1,000,000” and many others, and created the theme song to one of TV’s most popular shows, The Big Bang Theory, which is syndicated in over 80 countries around the world. The band just completed extensive Canadian and U.K. tours, and are about to embark on an almost 40-date tour of the U.S. on June 1.

Additionally, Barenaked Ladies have been recognized for the philanthropic efforts, including their If I Had A Million Flavours ice cream with Ben & Jerry that has resulted in over $125K donated to ABC Life Literacy Canada, and more recently Plus1 donating a dollar from every ticket on their 37-date Canadian tour to MusiCounts.

This new exhibition, called Milestones: Barenaked Ladies, will capture the band’s career trajectory—from their first concert as teenagers at Toronto City Hall, to making history as the best-selling independent artists in Canadian history, their international breakthrough in the U.S., to the present day with their induction into the Canadian Music Hall of Fame, and their undeniable power as a live act for nearly 30 years and counting.

“It’s still hard to get our heads around,” said Ed Robertson about the band’s induction into the Canadian Music Hall of Fame yesterday during a plaque ceremony at Studio Bell. “We’re the band that makes fun of the bands in the Hall of Fame.”

After 20 years with the band, former member Steven Page continues his successful solo career with a new album set for release later this year, along with tours of Eastern Canada and the U.K. this summer and extensive U.S. dates in the fall. “I hope our fans enjoy this exhibition as much as I’ve enjoyed looking back on the early days of our career,” said former member Steven Page. “I’m incredibly proud of all we accomplished together and I’m excited to celebrate it with this exhibit.”

The exhibition features treasures from the band’s founders, Ed Robertson and Steven Page, including early songbooks and lyric sheets, an acoustic guitar used by Robertson in the music video for “Falling for the First Time,” and Page’s 8-track cassette recorder used to make early demo tapes for “Jane” and “Old Apartment.” The exhibition will also include an assortment of memorabilia from members of Barenaked Ladies and Page, such as behind-the-scenes photos from the band’s formative years, press clippings, album artwork, and awards.

Milestones: Barenaked Ladies is accessible with paid admission to Studio Bell and will run from May 17, 2018 until February 2019.