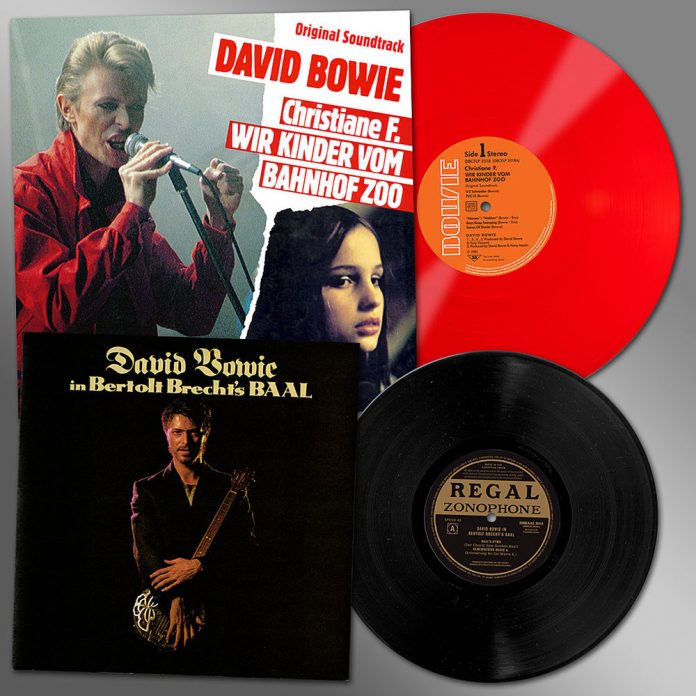 David Bowie released two classic studio albums between 1978 and 1982 (Lodger and Scary Monsters [And Super Creeps]), as well as a wealth of work for film, television and more. Bowie also found time to embark upon a massive world tour, documented by the double live album Stage, along with two acclaimed projects for film and television. On June 29, Parlophone will revisit that prolific period with Welcome To The Blackout (Live London ’78), as well as two special vinyl reissues exclusively for “brick and mortar” retail stores: Christiane F. – Wir Kinder Vom Bahnhof Zoo and David Bowie In Bertolt Brecht’s Baal.

The new releases begin with the CD and digital debut of Welcome To The Blackout (Live London ’78). This live album features performances recorded at Earl’s Court in London on 30 June and 1 July, 1978 during Bowie’s “Isolar II” Tour. The music was released earlier this year on vinyl as a strictly limited-edition triple-LP set for Record Store Day 2018.

Tony Visconti, who co-produced a dozen studio albums for Bowie throughout his career, recorded the 1978 concert which was later mixed by Bowie and David Richards.

The set naturally focuses on songs from the two albums Bowie released in 1977 – Low and “Heroes” as well as other earlier career highlights such as “Fame”, Ziggy Stardust”, “The Jean Genie” and “Station To Station” and the first ever live performance of “Sound And Vision”, included in this set was its debut live performance. Welcome To The Blackout (Live London ’78) will be available as a two-CD set as well as digitally for download and streaming in both standard and high-definition versions.

Christiane F. – Wir Kinder Vom Bahnhof Zoo is the soundtrack to the 1981 film based on the 1978 autobiography by German actress Christiane Vera Felscherinow. The soundtrack incorporates songs from several Bowie albums, including “Stay” (Station To Station, 1976), “Warszawa” (Low, 1977) “V-2 Schneider” (“Heroes”, 1977), and “Look Back In Anger” (Lodger, 1979.) Released on vinyl for the first time in 30 years, this fan favourite will be pressed on limited edition red vinyl and available exclusively at “brick and mortar” retail stores. The set includes Mark Adams’ original liner notes from the 2001 CD issue of the album.

David Bowie In Bertolt Brecht’s Baal features Bowie performing five songs that were written for German playwright Bertolt Brecht’s 1918 play “Baal.” Bowie recorded this EP with Visconti at Hansa Studios in Berlin in November 1981. Recently, all five songs were re-released as part of the exclusive Re:Call 3 compilation that accompanied the box set, A New Career In A New Town (1977-1982). This new limited edition 10” vinyl reissue comes in a six-panel sleeve that replicates the original 1982 packaging and is available exclusively at “brick and mortar” retail stores.

WELCOME TO THE BLACKOUT (LIVE LONDON ’78)
CD and Digital for streaming and download in standard resolution, 96kHz/24bit and 192/kHz/24bit resolutions.
CD1
Warszawa
“Heroes”
What In The World
Be My Wife
The Jean Genie
Blackout
Sense Of Doubt
Speed Of Life
Sound And Vision
Breaking Glass
Fame
Beauty And The Beast

Side2:
Station To Station
Look Back In Anger
Stay
Warszawa