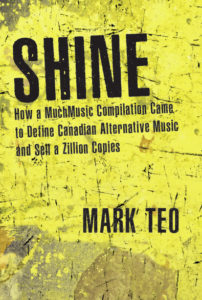 Written by Toronto-based music journalist Mark Teo (The Toronto Star, AUX, Fast Forward Weekly), Shine: How A MuchMusic Compilation Came To Define Canadian Alternative Music And Sell A Zillion Copies is a critical, humorous and always engaging look at one of the most notable phenomenons in Canadian music: MuchMusic’s first-ever Big Shiny Tunes compilation, released in 1996. Shine reveals how this compilation album, which left a massive cultural imprint on a generation of Canadians, was made and unpacks the impact of how one disc stretched across musical tastes and ultimately led to a transition towards personal curation in pop music.

“For a long time, Big Shiny Tunes wasn’t talked about, which is absurd,” said Teo. “It sold millions of copies, making it ubiquitous—you can find copies at any Value Village across the country. At the same time, it’s not taken seriously: it’s a uniquely Canadian compilation, and one that represents an era dominated by MuchMusic, Modrobes and Clearly Canadian. Big Shiny Tunes is an important, underrepresented and—without a doubt—hilarious chapter in Canadian music. It was a success by any number of metrics, but what does that say about Canadian music, Canadian culture, Canadian attitudes? Those are the answers I’m after.”

As one of Canada’s most acerbic and thoughtful music journalists, Teo has long examined Canada’s musical mainstays, often with a healthy amount of skepticism. But he also builds a more entertaining notion of how Canadian music could, and should, be recognized.

“I hope that readers find Shine nostalgic and entertaining,” said Teo. “It’s the product of another era, and Big Shiny Tunes simply couldn’t exist in 2018. But at the same time, this isn’t a book about conservatism; it’s not about pining for the way things were. I hope that readers can find humour in our collective childhoods, the things we’ve loved, the views we’ve held. Things change, and that’s for the better.”

Through extensive interviews and criticism, Shine dives into the era of the compilation, the album’s origins, its status as the ultimate gateway record and its still-unfolding influence on Canadian music—one track at a time. For every music lover who was turned on to a band because of Big Shiny Tunes, or can harken back to warm memories while listening to the omnipresent compilation, Shine is the book for you.

This book is a must-own for fans of Canadian nostalgia and may force you back into the used CD bin at your local record store. Shine will be available at select independent bookstores across Canada, online retailers, as well as the Eternal Cavalier Press website on May 25th. Pre-orders are now live.