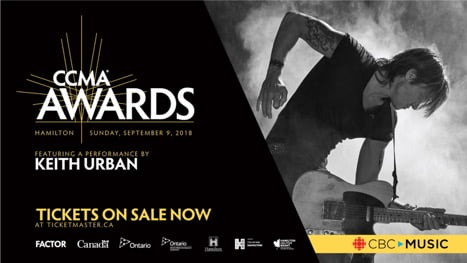 Hot off the announcement of Shania Twain as the show’s host, the Canadian Country Music Awards have confirmed a performance by Grammy-award winning artist Keith Urban. The performance will be a part of the nationwide broadcast from First Ontario Centre in Hamilton, ON, on Sunday, September 9, live in all time zones on CBC and on their website at 8 p.m. ET (5 p.m. PT).

Grammy-Award winner Keith Urban is no stranger to the CCMA Awards stage. This year, the platinum-selling artist will arrive in Hamilton celebrating the release of his ninth studio album, GRAFFITI U. Hitting #1 on all-genre charts after one week of release and recently gold certified in Canada, GRAFFITI U boasts singles such as “Coming Home” (ft. Julia Michaels) which is anticipated to add to Urban’s long-list of #1 hits (23). The second chart-topping album for Keith Urban, GRAFFITI U will lay the foundation for electric, high-energy performances both at the 2018 CCMA Awards and each night of the upcoming 10 Canadian dates of the “GRAFFITI U WORLD TOUR”.

Tickets for the 2018 CCMA Awards are available now, with GOLD and PLATINUM Packages available as of today. Single tickets and packages are available for purchase in-person through the FirstOntario Centre Box Office and online at ticketmaster.ca.