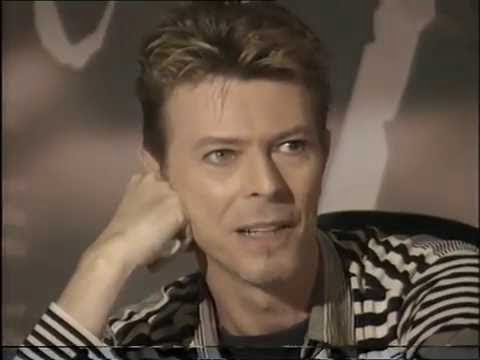 1. Outside is a concept album first released in September, 1995 by David Bowie and was his reunion with Brian Eno, whom Bowie had worked with on his Berlin Trilogy in the 1970s. Subtitled “The Nathan Adler Diaries: A Hyper-cycle”, Outside centres on the characters of a dystopian world on the eve of the 21st century. The album put Bowie back into the mainstream scene of rock music with its singles “The Hearts Filthy Lesson”, “Strangers When We Meet”, and “Hallo Spaceboy” (remixed by the Pet Shop Boys).

This press conference features a bit of insight into the making of the record, as Bowie and Eno visited the Gugging psychiatric hospital near Vienna, Austria in early 1994 and interviewed and photographed its patients, who were famous for their “Outsider art”. Bowie and Eno brought some of that art back with them into the studio as they worked together in March 1994, coming up with a three-hour piece that was mostly dialogue. Late in 1994, Q magazine asked Bowie to write a diary for 10 days (to later be published in the magazine), but Bowie, fearful his diary would be boring (“…going to a studio, coming home and going to bed”), instead wrote a diary for one of the fictional characters (Nathan Adler) from his earlier improvisation with Eno. Bowie said “Rather than 10 days, it became 15 years in his life!”, and became the basis for the story of 1. Outside.