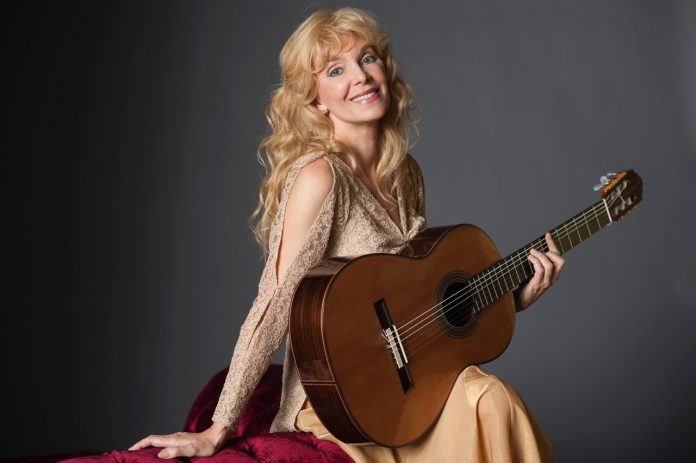 Liona Boyd, “First Lady of the Guitar,” will be receiving the Lifetime Achievement Award from the JoAnn Falletta International Guitar Concerto Competition on Saturday, June 9, at Kleinhans Music Hall in Buffalo, NY.

Boyd, an internationally renowned classical guitar player, has been given five Honorary Doctorates, The Order of Canada, The Order of Ontario, the Diamond Jubilee Medal, five Junos, and is five-time winner of the Guitar Player Magazine poll for best classical guitarist. On Saturday evening, her award list grows longer with the inaugural Lifetime Achievement Award from the JoAnn Falletta International Guitar Concerto Competition.

Boyd plays a romantic and unique brand of classical, folk, and world music that she has performed for dozens of world leaders, including the British Royal Family and the US president. Since 1975, when she made her Carnegie Recital Hall debut, Boyd has been called “The First Lady of the Guitar.” Through her concerts, television specials, and 28 recordings, many of which attained Gold and Platinum status, Boyd introduced millions of people around the world to her beloved instrument and her total online views are over six million.

Boyd has recorded with Sir Andrew Davis and the English Chamber Orchestra, Yo Yo Ma and Georges Zamfir, and breaking with classical tradition, she has toured with Gordon Lightfoot and Tracy Chapman as well as recorded with Chet Atkins, Eric Clapton, David Gilmour, Steve Morse, Roger Whittaker and Olivia Newton-John.

Boyd has composed and arranged hundreds of pieces for the guitar and also written a best-selling autobiography, In My Own Key… My Life in Love and Music. Her new autobiography No Remedy for Love, was released in 2017 by Dundurn Press. For more information about Boyd, click here.