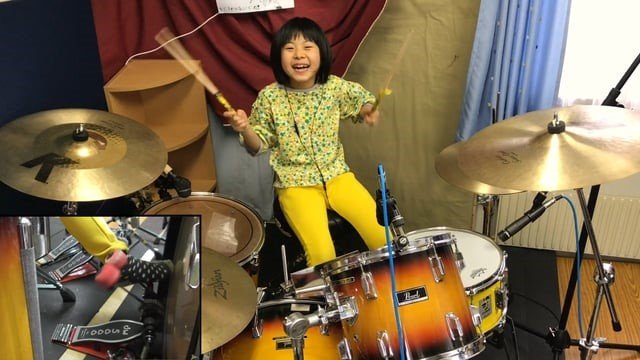 Eight-year-old Yoyoka Soma covered John Bonham’s drum part on Led Zeppelin’s “Good Times Bad Times” as her entry into the 2018 Hit Like A Girl drum contest. Does she win? No clue, but stay tuned.

She says, “When I was a just small baby, my parents had a home studio and there were various kinds of instruments. My parents were performing music activities as amateur singer-songwriters and they cradled me with their music. When I listened to their songs and guitar performances, I was eager to join them and couldn’t stop beating out a rhythm. That was why I started playing the drums. The drum was the first instrument in which I felt an interest in my life. My parents’ music peers often visited us to play together. I was glued to the powerful and dynamic performances by the drummers. At age 2, I was playing the drums as if I were playing with toys. At age 4, I started performing at concerts. At age 5, my family band “Kaneaiyoyoka” was formed by my parents. We have released 2 self-produced CD albums so far. Not only the drums, I also play the keyboard and perform as a vocalist. I compose lyrics and music as well.”