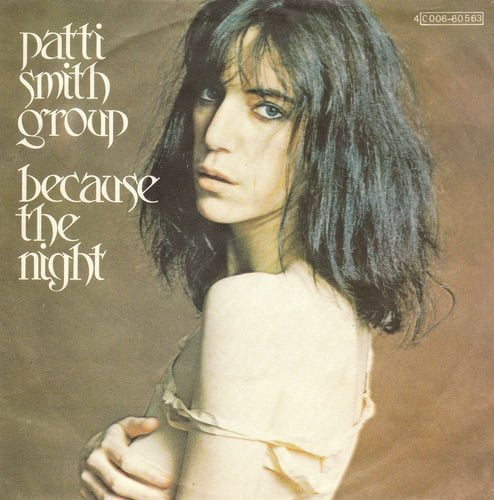 We didn’t have any money. To make a long distance phone call then was really expensive. If you were making $32 or $40 a week, and your phone call was $7 or $15…  we only talked like, once a week. So Fred Smith (husband) was supposed to call me at like, 7:30, and I looked forward to his phone calls more than anything in the world. There wasn’t anything that could eclipse my phone call with Fred. 7:30 came; I guess something happened and he didn’t call… Time was going by and I just was beside myself. I couldn’t concentrate. As I was pacing around, I noticed that cassette sitting there. I can see it. It was a typical cassette. It might have said “Because the Night” on it — I think it did — in Bruce’s hand. I thought, “Okay, I’ll listen to the song.”

So I get my little portable cassette player, and I put it on, and I remember looking at it, just staring at this cassette player, waiting for the phone to ring… it’s in the key of A, my key; anthemic; great beat. I listen to it, and I remember it, all by myself, standing there. There are certain things in my past I can’t remember, but this I can remember second by second. I stood there, and I shook my head, and I might have said it out loud: “It’s one of those darn hit songs.”

I thought, “This is a moral dilemma for me: Here, he’s giving me a song that’s going to be very popular if I can deliver it. And so, thus, my first really popular song will be written by somebody else — or [someone] not in my band. Is that right?” It was because I didn’t have any sense of being a singer. Now I know that people sing other people’s songs all the time, but I was like, listening to Bob Dylan, Neil Young, Jim Morrison — people who wrote their own songs. I thought I was supposed to write my own songs, other than songs that I’m reinventing or interpreting. I thought, “Is this fair?”

Meanwhile, Fred hadn’t called me, so I sat there and listened to it over and over. Of course, it’s one of those songs where it’s an immediate song — it’s like the first time you hear a Smokey Robinson song; it’s like potato chips. You want to hear it over and over.